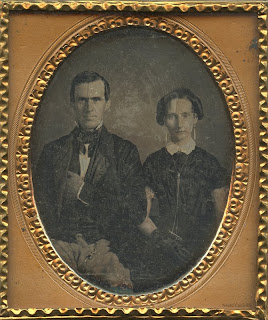 Today is the anniversary of Louis Daguerre's birth in 1787. Good ol' Louis invented the daguerreotype, one of the earliest types of photography and the first to be commercially successful. Click here to see the very first dag, created by Louis in 1837. Not sure what's up with the two (kinda creepy) cupid heads.

Unfortunetly Mr. Daguerre's birthday wasn't listed on my calendar this morning, but thanks to today's fantastic Google Doodle, I didn't miss it.

Google's clever doodle inspired me to dig out the earliest photo in my collection, the 1850's daguerreotype couple from above. I picked the photo up years ago at an antique store and they've been instant ancestors ever since. Who were these people? That's the thought that spins in my head when I look at the photo. It was expensive to have a daguerreotype photo made and it was usually the wealthy and the affluent that could afford it. Our couple here, looks like they fit in that class of folks. I'm guessing their ages to be somewhere in the early thirties. Actually the woman might be in her twenties. Just think, they probably met or knew men that fought in the American Revolutionary War. I wonder what happened to this couple? Just a few years after they sat for this photo, the American Civil War would break out. Were they northerners or southerners? Did this man fight? Did he survive? Why is he doing an impression of Napoleon with his hand tucked in his coat? So many questions!!!

This is what I love about old photos - the unanswered questions and the unending mystery!

Happy Dag Day everyone!
Posted by Mayor Todd Franklin at 9:39 AM