One of the best toys I ever found under the Christmas tree was my Stretch Monster! 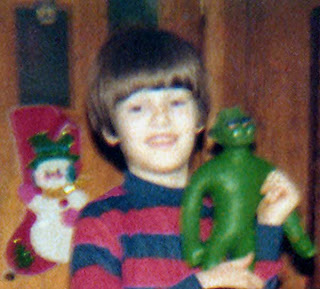 In our family we have a Christmas Eve tradition of opening one present and it can be any present that you want. Of course I usually picked the one that might be the main gift and most of the time I was right. At least I was right in 1977 when I unwrapped my old buddy Stretch Monster.

A few of the kids at school had a Stretch Armstrong, who was kind of fun, but still looked like a plain boring wrestler guy. When I discovered that Mr. Armstrong had a nemesis in the form of a fang faced green-scaled monster, I just had to have one. I’m sure I bugged my Mom silly, wishing for one on Christmas or Christmas Eve as it turned out.

This monster was amazing! His skin had a scaly texture and he was cold to the touch. His body was kind of soft when you pressed your finger into him and if you smacked him, ouch, he was hard as a brick! After hours of stretching I wondered what made him work, how did he have these amazing stretching powers? I would unfortunately find out a few years later.

Some kids get attached to stuffed animals and teddy bears and some kids like me get attached to green rubber monsters. For the next couple of years he was my pal even after the wave of Star Wars toys invaded my house. Luckily I never took him outside or heaven forbid, school, the place all toys became lost or broken. I was very protective of Stretch and he actually survived until the early 1980's. 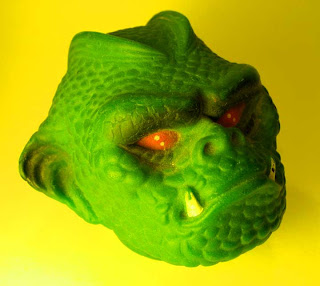 Only thing left of my poor old Stretch Monster.

One day I looked inside my toy box and saw Stretch slumped over and looking thinner that usual. To my horror I finally found out what made him work, red bloody Karo Syrup! This syrupy substance was all over the bottom of the toy box. Stretch Monster was dead and he took with him all of my cereal prizes that I had been saving. Just like the Blob from that infamous movie, Stretch Monsters blood absorbed and ruined all of my Freakies, Cap’n Crunch and Flintstones cereal premiums. Needless to say, that day was a very black day indeed.

Now, the only thing that has survived as a memento from more simpler days is the head of Stretch Monster, my favorite toy.

Stop by some time in January for Stretch Monster week, where I’ll post some scans of the rare Stretch Armstrong and Stretch Monster coloring book and photos of a deflated Stretch with his original box!

Now you know why I use Stretch Monster as my icon!

I bet it was pretty freaky for any kid who used Stretch Monster as an autopsy victim if a thick red liquid came out, yeesh.

I feel your pain. I stored many of my cereal premiums, including freakies, and the General Mills monster cereal toys, in with a bunch of rubber monster jigglers and gumball amchine bugs, only to find years later that the rubber heated up enough to melt a lot of the plastic items they were packed with.

i knew this was what happened because in researching a story i wrote for "The X-Files" comic I came across a story about a warehouse fire caused by boxes of surgical latex gloves.

Thank goodness I opened this box before the temperature increased.

On a related note, I also saved the heads from my destroyed mego-like Fly and Cyclops toys from the Monsters of Myth and Legend series.

Aparofan - the coloring book pages should get a chuckle or two.

Smurf - Yeah, it was kind of gross since it looked like blood. A friend and I did just that, performed an autopsy on Stretch in the bathroom sink.

John - Oh man, I bet that one did hurt and glad you got to it in time. Yikes! I'm sure you're like me and had to shell out more than enough cash just to buy some of that stuff back. At least we have our monster heads!

I wonder if that's where they got the idea for the acidic blood in Alien.

(We had the same Christmas eve gift rule, but we weren't allowed to go for the big one.)

I'm still looking for the murderer, but I'm kind of thinking it could be Gargle from the Freakies. If it was him, then justice was served, since the ooze got him too!