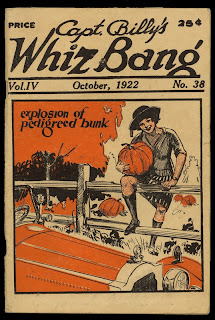 Hey, I think that gal is stealing a pumpkin out of that field. She better watch out or the Great Pumpkin might get her.

With a fun cover like this you would think Capt. Billy would have added some Halloween tomfoolery inside the magazine, but alas he must've forgot that his issue would be the October issue. I can't believe the good captain didn't think that some guy 86 years into the future might want to blog about his magazine during a Halloween countdown on a computer!

As you've been reading this ramble, you might be thinking to yourself that the title of this magazine has a familiar ring to it. The big hint is that Capt. Billy was really W.H. Fawcett a war veteran and a magazine publisher. Does Captain Marvel and Billy Batson from Whiz Comics ring any bells? 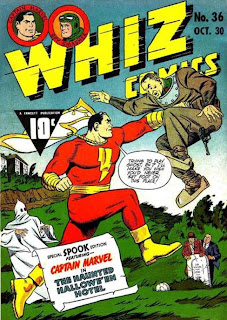 Whiz Comics started in 1940 and was published by Fawcett. It is obvious that this magazine title inspired the comic book title and the character of Billy Batson.
Posted by Mayor Todd Franklin at 12:13 AM

So there really was a Capt. Billy's Whiz Bang! It was mentioned in that song from "The Music Man" but I thought it was just something they made up.