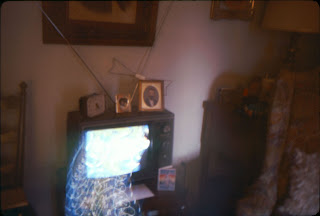 One word sums up this 1986 (the year Poltergeist II came out) slide that Major Pepperidge sent in and that word is SPOOKY!

Unlike my fake Photoshop ghost photos that I posted on Weird Hollow, this slide has been untouched. No Photoshop, no tricks and no tomfoolery as it’s just like the Major found it. It looks like a ghost is springing out of that television set. Click on the above photo for a closer look.

My first thought was that the photographer moved a bit as he snapped the photo. Only thing you would think that the rest of the photo should be a bit off and blurry.

Could this be the ghost of the man’s photo that sits atop the TV set? 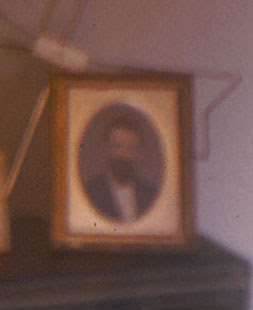 I don’t think so, because when you take a closer look, you can make out that our ghost is merely the local weatherman's map. You can see multiple Hs and Ls (highs and lows) along with those jet stream swirly things. 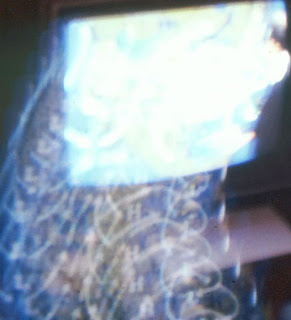 Still, I can’t explain how and why this “glitch” happened and who knows maybe it really is a poltergeist caught on camera.

I think it's a cardboard stand up they had in the house!

That's pretty cool. It looks to me like the camera moved which caused the images on the screen to stretch.

That certainly is a cold front moving in through the living room.

Thanks for all the great stuff this month, both here and at Weird Hollow. Please put me in for a membership in the Vlad fan club.

It's been an honor, once again, to connect Halloween countdowns with you.

Mike - Yeah, maybe they're watching Three Men and Baby on the TV. Oh wait it wasn't out yet.

John - It's always a blast to do the countdown with you and your posts really keep me going. I'll let Vlad know you want in on the membership. The only fee for membership is blood!