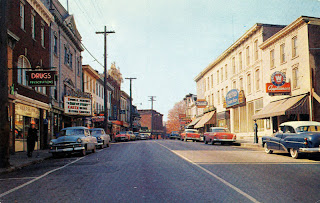 Lets visit 1956 Walden NY with this mid-century moment frozen in time inside a picture postcard. At first glance this card looks like a common street scene with little activity in the photo. There’s a man sitting inside a blue car on the right side of the street. 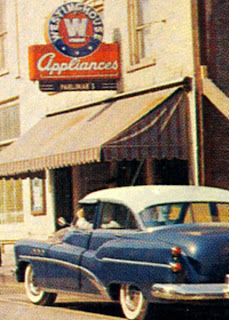 He’s probably waiting for his wife who is inside the appliance store looking at a new Westinghouse washing machine. Bored, the man watches a policeman through his windshield to pass the time. 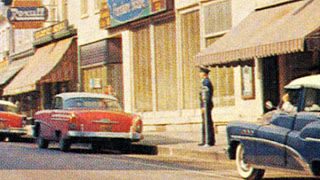 The policeman has had a simple day and he’s getting ready to walk down the street for a quick ice cream cone at the Rexall.


If we look across the street, a man is putting his nickel in the meter, so he’ll have enough time to have a “few” with his buddies inside the Village Inn Bar & Grill. 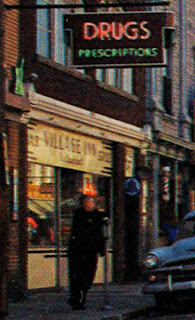 “What does this card have to do with Halloween?”, you sneer. You might’ve noticed at the end of the street a large tree with fall colors. This tells us that the photo might've been taken in October and that kind of fits into this month’s theme. 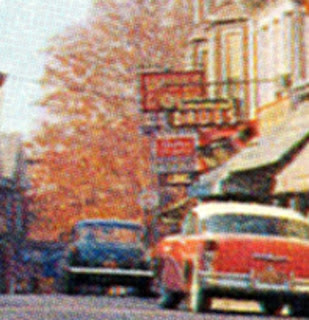 No, the real reason for this postcard to make this month’s countdown is that a double feature is playing at the Didsbury Theatre and a scary sci-fi movie is listed on the marquee. In just a few hours the only movie theater in town will be hopping with kids of all ages, waiting to see these two movies. (I’m guessing this photo was snapped late in the afternoon.) 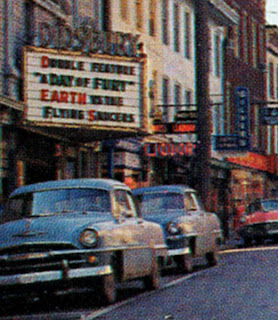 Of course they’ll need to sit through the first movie A Day of Fury. No, it’s not about some insane maniac monster, but just a plain old western. It will be worth the wait as the next movie on the double bill will be the future classic Earth VS. The Flying Saucers! I can just imagine the audience being amazed by the realistic effects by the great Ray Harryhausen!

I wonder how many kids will run home and be inspired to draw and build the things they saw in the movie just like the generation before this one did after seeing King Kong or my generation will do after seeing Star Wars.

You see, there really is a lot going on in this postcard and I wish I could step inside and hang out there for a little while.

Official Walden, NY site link so you can see what it looks like now. The theater is long gone.
Posted by Mayor Todd Franklin at 9:13 AM

Todd, your forensic analysis of this little old postcard made me laugh. Thanks for the ghoulish fun!

The link is dead.

I want to take a walk up and down that street with my camera in hand. Oh, those old neon signs and that marquee!

Now that's what I call detailed analysis... I've got tons of old postcards and I love 'em but I don't think I've ever noticed that much detail in any of them!! Good stuff!

Big Daddy - IT'S ALIVE, IT'S ALIVE The link is now alive!

Dane - I wish you could as I would love to see your photos of this town. They would be great!

Reggaexx - Glad you liked the detail and I've been enjoying your countdown too!