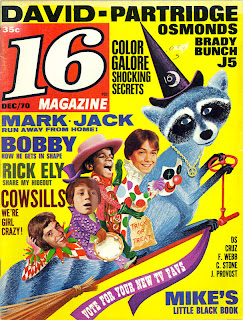 It doesn't get much scarier than this magazine cover from the December 1970 issue of 16 Magazine. (The December issue was on newsstands in October.) I’m not sure what frightens me more the giant racoon witch steering a broomstick or this fearsome foursome of teen idols riding on the coon’s back?

Ok, we see David Cassidy dressed as a clown, Michael Jackson as a groovy cowboy, Danny Bonaduce looks like he’s going for the Willy Wonka look and Rick Ely is a court jester.

I don’t know about you, but I would run for my life if I saw this flying above my street!

For fun I added some word balloons to the cover. Click on the photo for a closer look! 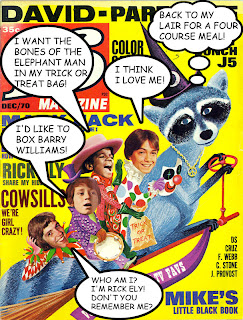 Posted by Mayor Todd Franklin at 9:08 AM

That is the coolest Halloween cover that I've ever seen... no exaggeration. It's just so... inexplicable. Why a raccoon of all things? Why a giant raccoon? Why Rick Ely? Really, who is Rick Ely?

And the combination of the pagan-ish "16" symbol on the hat and the peace sign necklace... just great!

Hmm, I wonder if this would even be possible today. Would anyone buy it if it had Hillary Duff, Lindsay Lohan, etc. on it instead of these guys? Ah, the good old days. Thanks for clearing up who that last guy is, but I'm with steven a. Who the hell is he?

Steven - Rick Ely was a soap star and I think he had one or two bubblegum pop songs. I have no clue about that kooky raccoon.

Stephen - Yeah, I think US Magazine should have covers like this one.

I can't believe the raccoon is wearing a peace-symbol necklace. Pure genius.

I don't know about the soaps, but at the time this magazine came out, Rick Ely was starring in a television series called THE YOUNG REBELS...think THE MOD SQUAD, only set during the American Revolution.