I guess most of us have our little quirks and one of my quirks tends to be more on the compulsive side. This so called quirk has to do with a set of 2 inch tall space creature erasers or if you prefer, space aliens. Anyway, they were made by Diener Industries the leader in eraser toys.

It all started innocently enough back in 1980 at the local McDonald’s. The Happy Meal was still fairly new and usually the prize inside was just ok, but nothing to write home about. 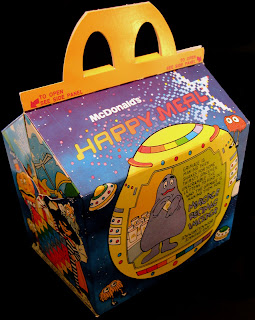 This all changed as one day hiding under my cheeseburger and fries inside that happiest of boxes I discovered a green bat creature. He was made like those silly Happy Meal robots that were prizes a few months earlier, but he was more durable and with much better detail. This bat-guy had a familiar look to him and I knew I had seen him before. It finally dawned on me that he was just like Man-Bat that unfortunate character out of the Batman comics. 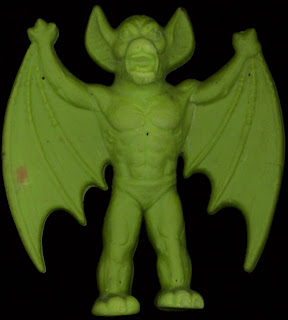 Of course I wanted more and I wanted to complete the whole set. After a few weeks of multiple visits to McDonaldland and trading with friends I finally got a complete set. Ever since then whenever I see one for sale in a thrift shop, flea market or toy show, I just have to pick it up. The cool thing and probably the reason that I adore these so much is because they were based, inspired or even ripped off of various monsters from movies or television 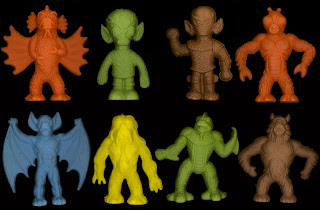 Now let’s take a closer look at each one. 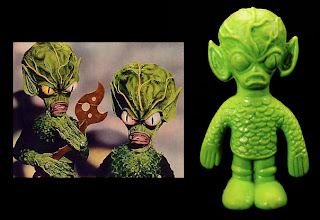 Veined Cranium Creature - design based after the Martians in the 1957 movie Invasion of the Saucer Men. 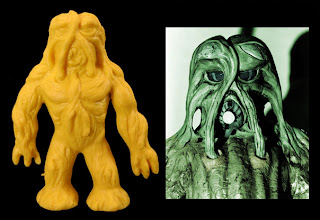 Tree Trunk Monster - design based after the aliens in the 1958 movie I Married a Monster from Outer Space. 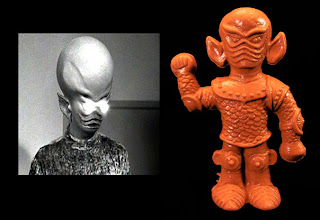 Gil Face Creature - design based after an alien named Ikar from the 1964 television series The Outer Limits in the episode Keeper of the Purple Twilight. 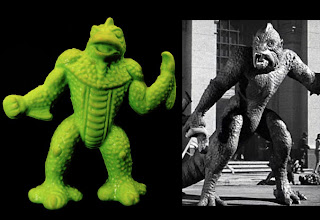 Lizard Man - design based after Ray Harryhausen’s creation the Ymir from the 1957 movie 20 Million Miles to Earth. 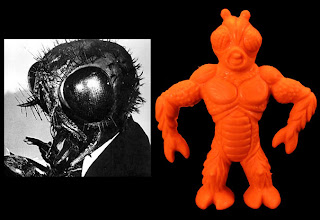 Insectman - design based after the Fly from the 1958 movie The Fly. 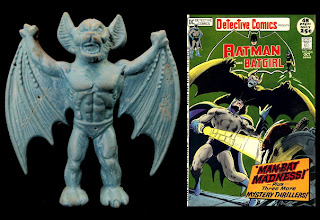 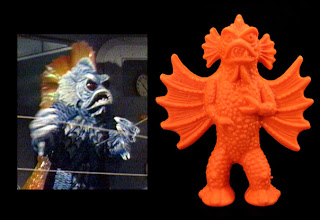 Winged Amphibian Creature - design based after the creature in the 1966 movie Destination Inner Space. 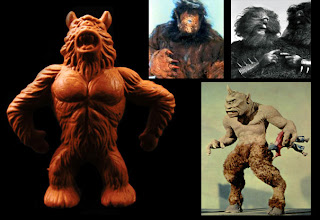 Horned Cyclops - I’m guessing this one might be an amalgam of different cyclops. Pictured is the Ray Harryhausen’s Cyclops from The 7 th Voyage of Sinbad, the Lost In Space Cyclops and the Siamese Cyclops from The Three Stooges Meet Hercules.

Besides the different characters in the set there are also five different original colors to collect. They came in yellow, green, blue, orange and brown.

Another variation is the eraser material which is hard, normal and soft. 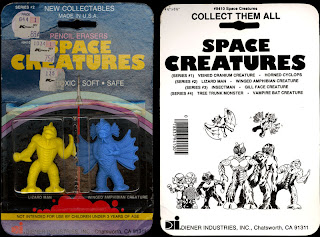 Besides being “Space Aliens” prizes in Happy Meal boxes, Diener also sold them in carded packages as Space Creatures.

Apparently they were also found in gumball machines made of a slick rubbery material with an added suction cup. The quality is poor and the molds were probably made from the actual erasers. I’ve only found four of these and I’m not sure if the other ones from the set were made.

Fairly recently in the past few years, they’ve been spotted in bright day glow colors.

I’ll continue to rescue/collect these little guys until I’m 110 years old or until a massive pile of space creatures fall on me. If anyone has any info, photos or advertising relating to these, I would love to hear about it.
Posted by Mayor Todd Franklin at 1:41 PM

Great post NC! Hopefully you won't go George Lucas on us and give them new names in 20 years!

Great article and great eye! I've got just a couple of these in my collection but, apart from the Saucer Men & the Fly, I'd never recognized them as being based on any particular movie monster. I should have at least caught the Ymir. It gives me oodles of respect for the designers that they would crib a creature as obscure as that whatzit from Destination Inner Space.

And being buried under a pile of tiny rubber space aliens would probably be the coolest way any person has ever died!

I totally forgot about those!

I used to have some.

Another great post!
Funny I bought a pack of these at Hobby Lobby a few years back and got rid of all but the Saucer Man guy.
Ignorantly I thought it was the only one based on a b-movie monster, but I just didn't look close enough. Now I understand the full brilliance of this series and I must reclaim this set. I wonder if Hobby Lobby still has them.

Thank you. Like big daddy, I used to collect these too. We used to swap stuff back and forth all the time in 5th grade, mostly these little things and those giant combs for your back pocket, the ones with sayings on them.

I've never manged to get any of these, other than a blue "I Married a Monster From Outer Space" alien which underwent some weird chemical decomposition. It seemed appropriate, but I was still bummed as that's my favorite horror/sci fi movie of the 1950s.

I'd love to get a full set of these little guys.

There were actually several other models. I personally have Man-bat, Medusa and a Pterodactyl. I remember there being a Robbie Robot from Forbidden Planet and several others but, I can't remember what they were. As you mentioned, there were different textures of material. The Robbie Robot I had was very soft foam rubber and didn't hold up well but, the three I still have are very firm rubber. I'd love to get all of them again!

I just found some other sites with pics and info about the other erasers! I had all of the soft ones in this link but, they didn't hold up well. (bottle-rockets are rough on toys).
http://lightyearstoyesteryear.blogspot.com/2007/03/mcdonalds-space-alien-eraser-happy-meal.html

Here are the dinosaurs you can buy.
http://www.wincraftschool.com/Dinosaur-Figurines-6-styles/Catalog.cfm/iProdID/163817

I had forgotten about the cars until I found out Diener Ind. became a subsidiary of Wincraft and started looking around!
http://www.wincraftschool.com/Super-Wheels-6-car-styles/Catalog.cfm/iProdID/163670

I had the jets too! Man! I wish I had saved these!
http://www.wincraftschool.com/Jets-6-Jet-Styles/Catalog.cfm/iProdID/163671

If you use the search bar with the pulldown menu, you will find "space robots" and all the others. Unfortunately, I can't find the movie monsters.
http://www.wincraftschool.com/Catalog.cfm/

Very insightful post! I loved those Diener Monsters also when I was a kid...even had my 2nd grade teacher (Mrs. Williams) take my Horned Cyclops from me. My sweetest 80's memories come from collecting Diener Monsters and GPK Cheap Toy figures...Cheaptoyman (Midas Wilder)

I'm happy to report that I just found the remainder of my set of these today. OF COURSE I didn't throw them away. Looks like I never had the insect or amphibian, but the others are far more appreciated thanks to this classic post!

I have this set for sale. It contains 7 of the 8 creatures. This is the set from The McDonalds Happy Meal in the late 70's. The 8th creature that is missing is the Tree Trunk Monster. The set comes with 5 extra creatures. 1 extra Vampire Bat Creature,1 extra Lizard MaN, 2 Extra Insect Men, and 1 extra Horned Cyclopes. I can be reached at msoward2007@yahoo.com or they will be on Ebay with picutres also. My ebay username is maddibags. I also have a complete set of the Diener "Space Raiders" Mcdonalds set as well(complete with all ships too).. The space radier set includes a RARE light Grey color Brak robot character

This isn't meant to be a shameless plug but you can see a few of these that I own. I bought the from my school's Scholastic book fair.

I would have though by the age of 10 you'd feel too old for a Happy Meal.

Great post! I have these and knew some were based on movie monsters. I had trouble identifying Lizard Man, Winged Amphibian Creature, and Horned Cyclops, but I came to the same conclusions about the others.