Originally this post was going to be for the League of Extraordinary Bloggers. I didn't realize during my blogging absence that the club had disbanded. For the past few Hake's auctions, club members were posting virtual auction shopping sprees and it was one of my favorite assignments from the club. So in honor of LOEB, here we go for one last time. 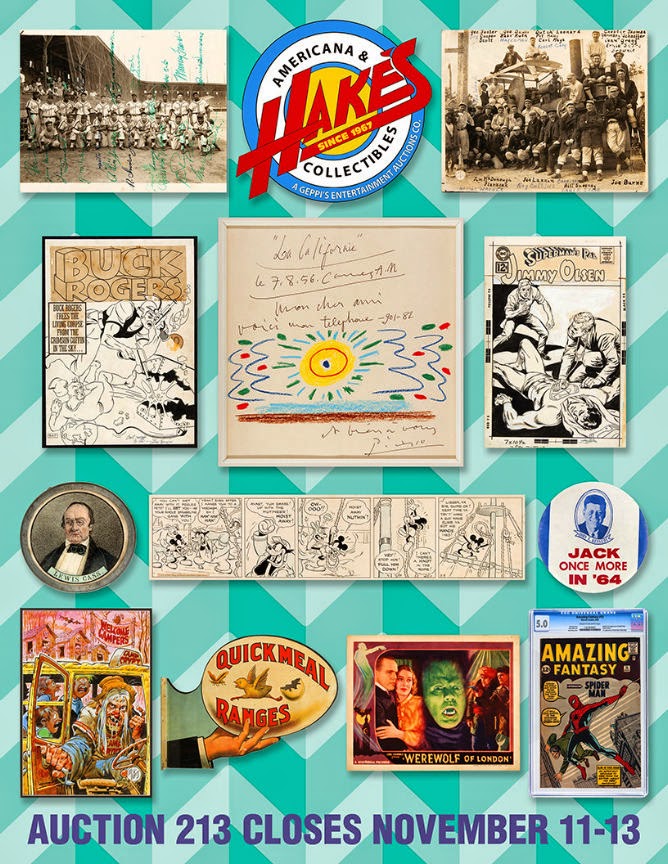 Halloween might be around the corner but whenever I get the latest Hake's Auction catalog, it feels like Christmas! Their newest auction #213 is ready for bidders and it closes out on November 11-13. This appropriately numbered auction has lots of treats for the Halloween/monster collector and since we're approaching the end of the Halloween countdown let's take a look at thirteen items. 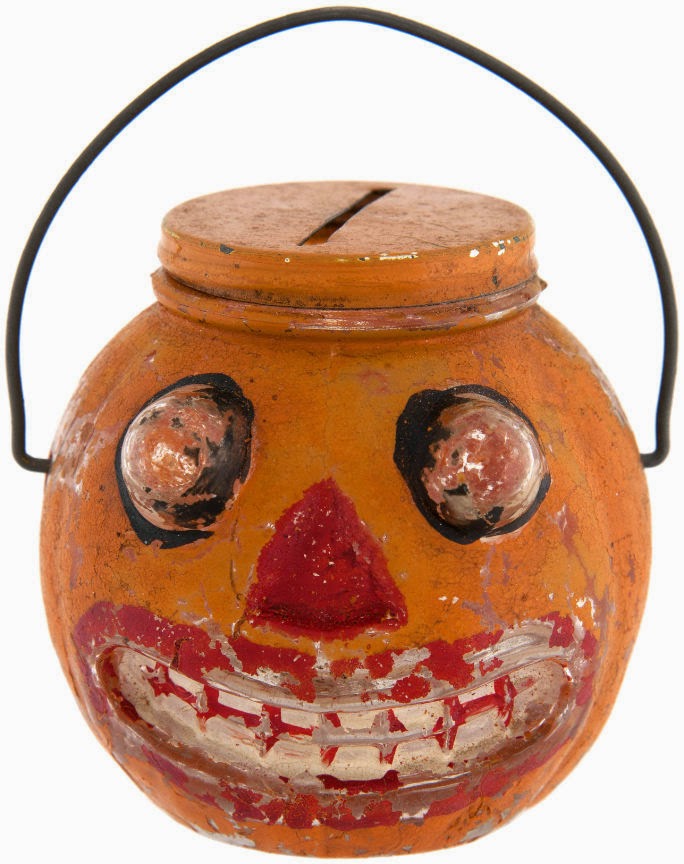 Glass candy containers are always fun but this neat little Jack-O wins the cakewalk of cool! For something from the 1920s, it's amazing that it still has most of its original paint. 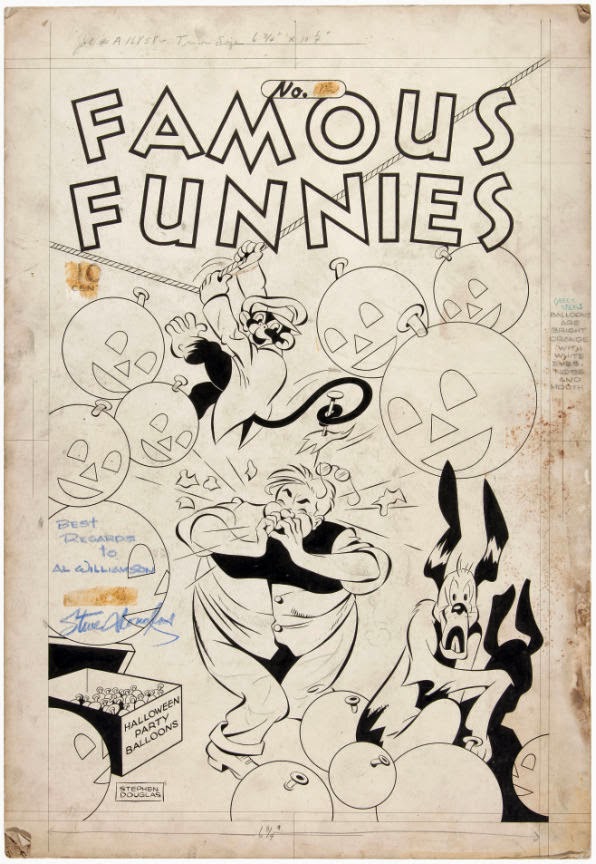 I love looking at original comic art and it's always great to see pieces from the golden age. This Famous Funnies cover features a fun Halloween theme by artist Stephen Douglas. With Famous Funnies, Douglas was one the first editors in comics and was a mentor to many great comic artists. This cover was a gift from Douglas to the great Al Williamson. 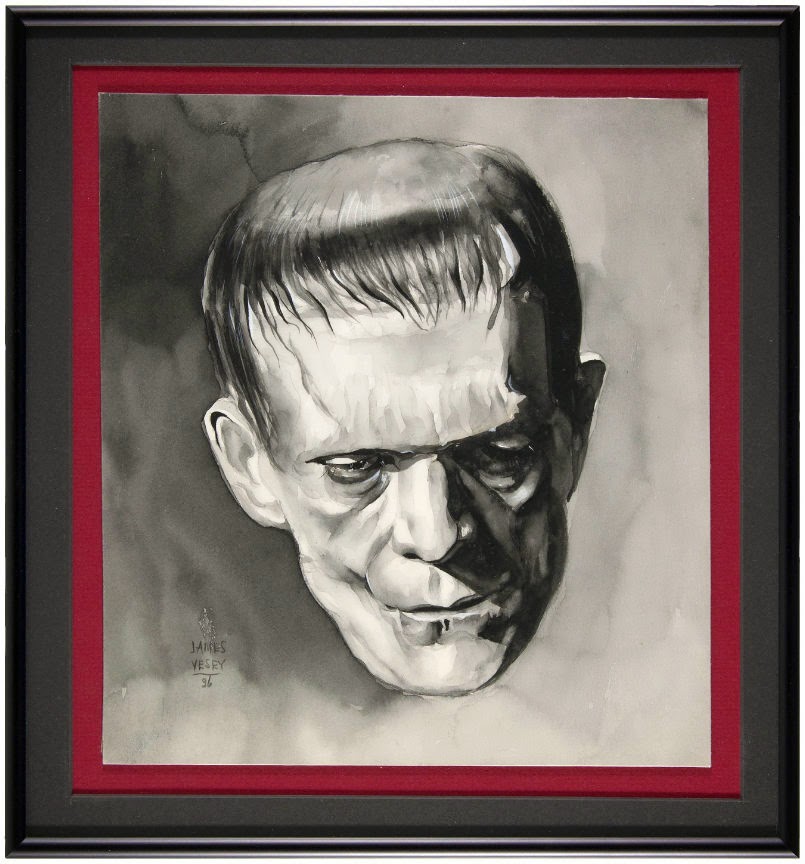 Karloff's likeness as Frankenstein's monster is portrayed in this fantastic painting. Even though the painting was created by amateur artist James Vesey, it's still a special piece. Besides the excellent rendering, it was created in 1936, just five years after the original release. Talk about an early example of Fan Art! 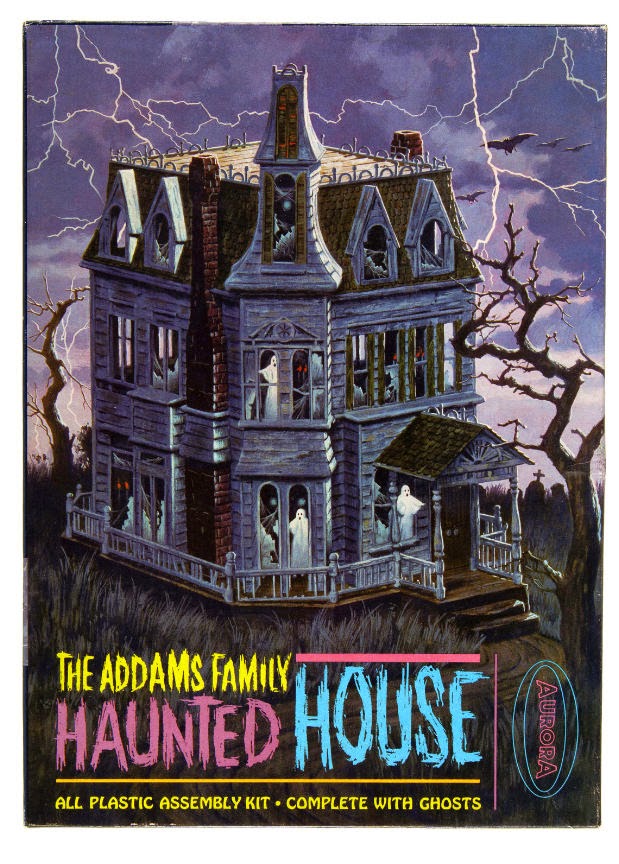 Go ahead and just stare at this wonderful box art! Aurora had some amazing artists designing their boxes. So what happened to the Addams Family? Did they simply move away or did something nefarious happen to them? Anyway, Aurora evicted them and the house became haunted. 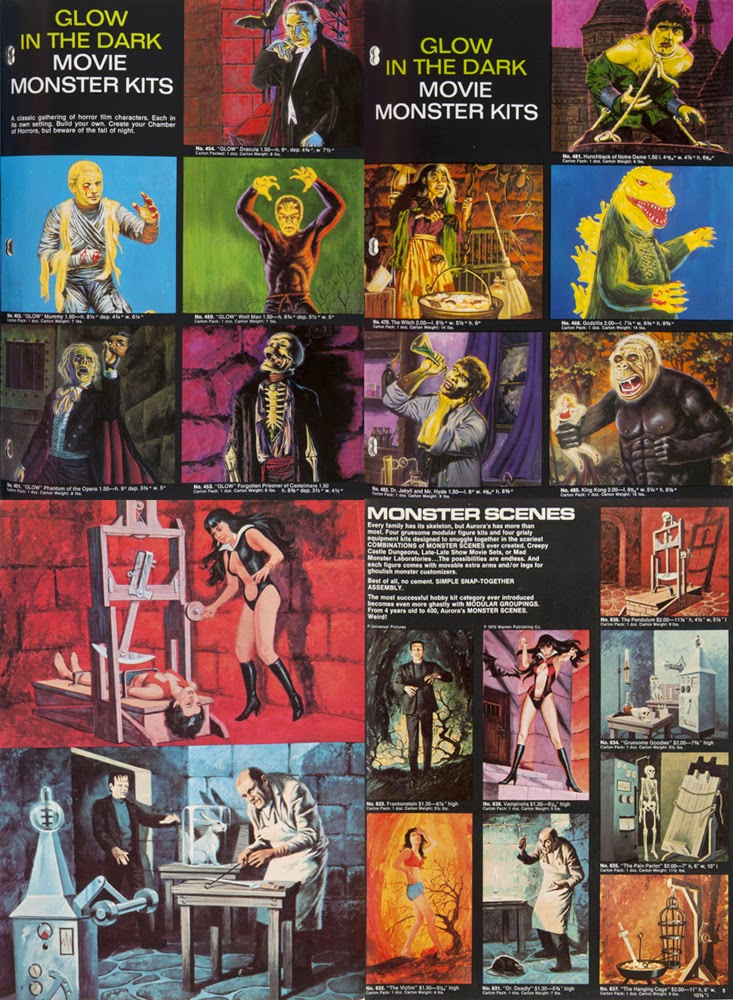 Here's another way to look at some fantastic Aurora artwork and that's by flipping through the retailer's catalogs. One lucky winning bidder will have access to the awesome textless box art. This lot features catalogs from 1970, 1971, 1973 and 1975. 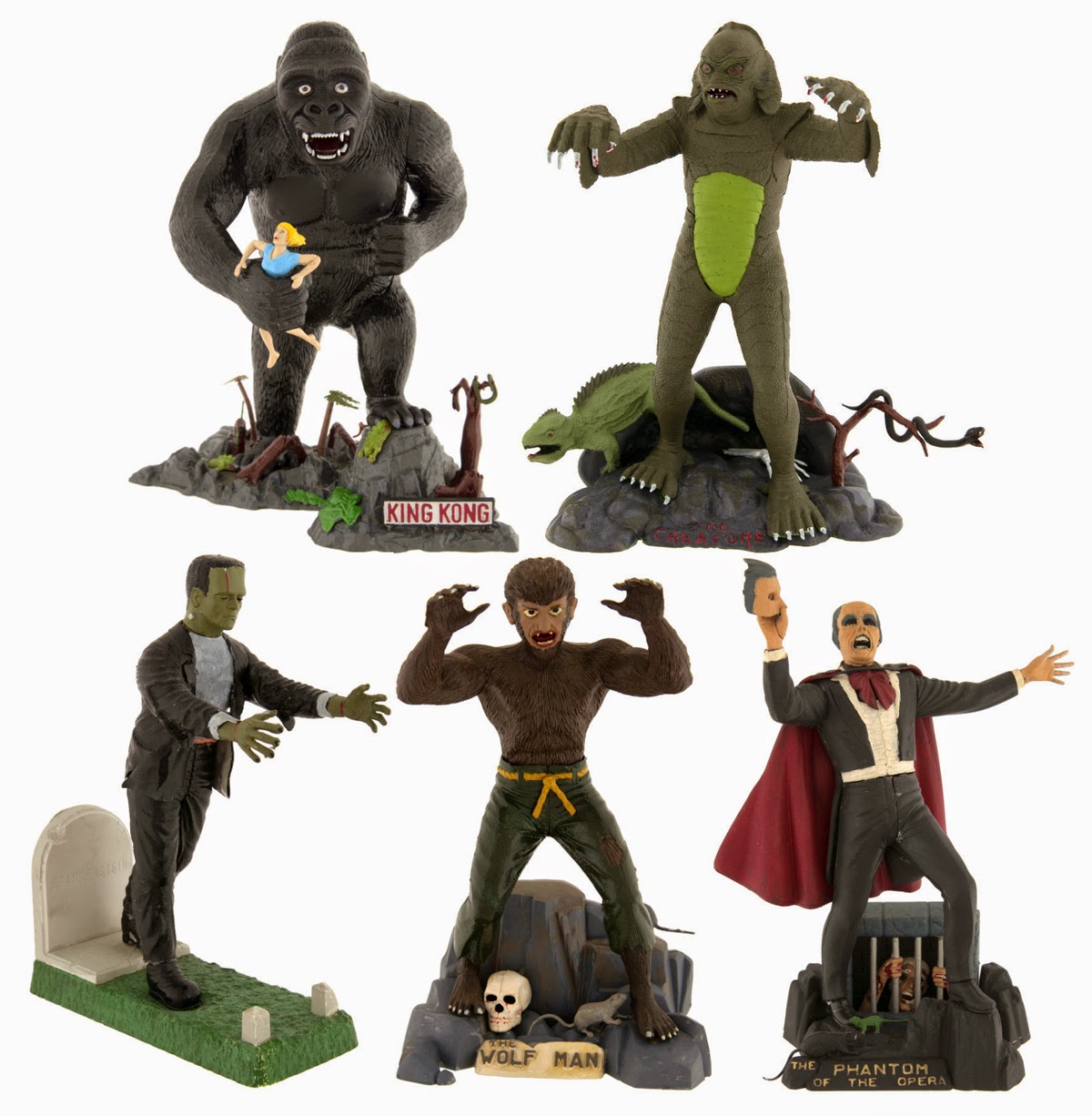 There's just something neat about seeing a collection of built-up monster models. I'm sure if I was born a decade earlier these monsters would have been proudly displayed on my bookshelf as a kid. 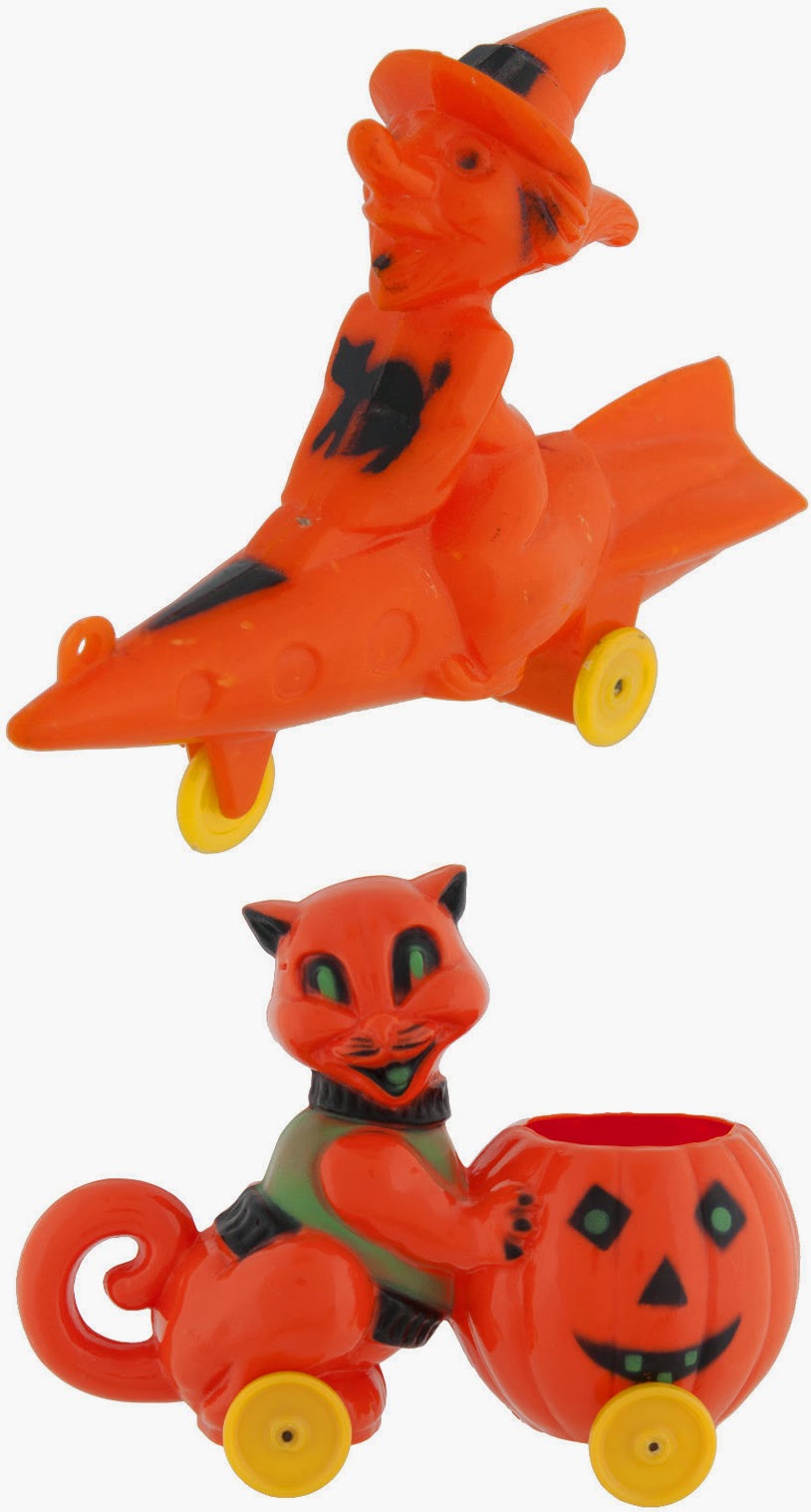 Back when I worked at an antique shop, these little Rosbro Halloween toys never stayed in the store for very long. They always sold and for good money. My favorite has always been the witch on a rocket! 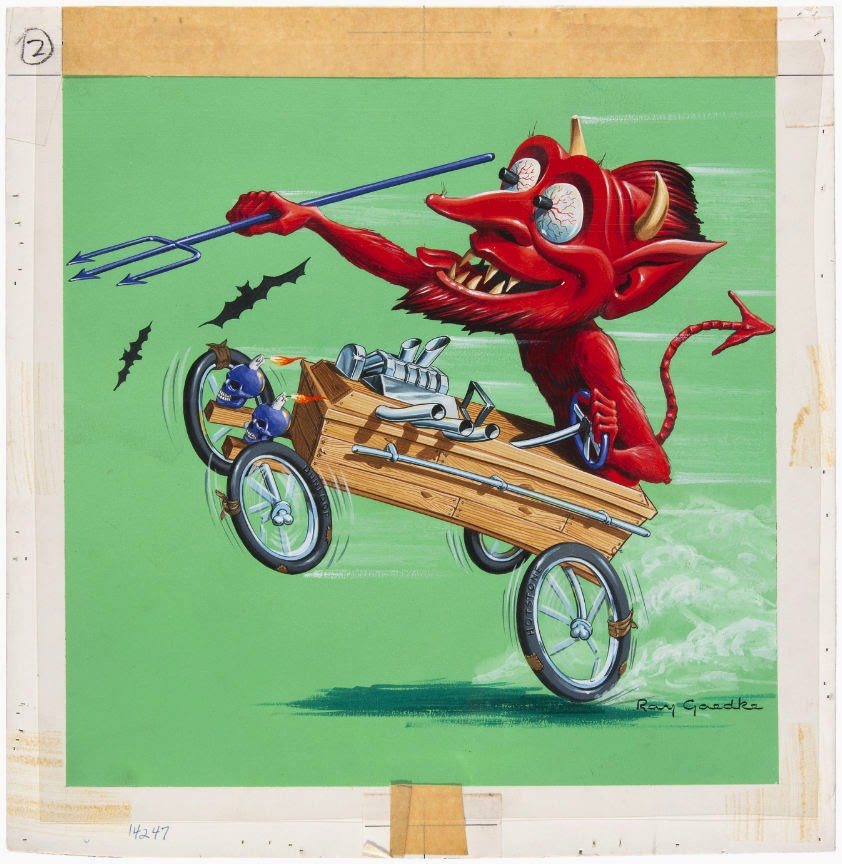 This original art is crazy man, crazy! 1960s kids were lucky to have so many wild model designs to choose from. I think a rock band should buy this and repurpose it into their next album cover. 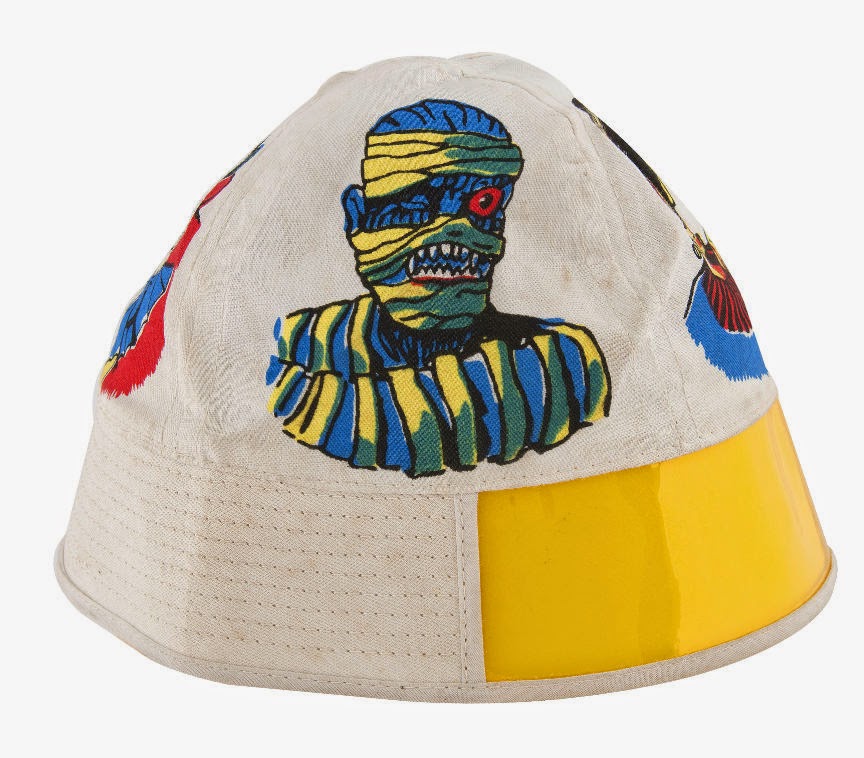 This Monster Beach Hat almost leaves me speechless! Sure, there are items in Hake's latest auction that eclipses this for quality and value, but this piece is simply awe inspiring. (Be sure to click on the link to see the other monsters that wrap around the hat.) 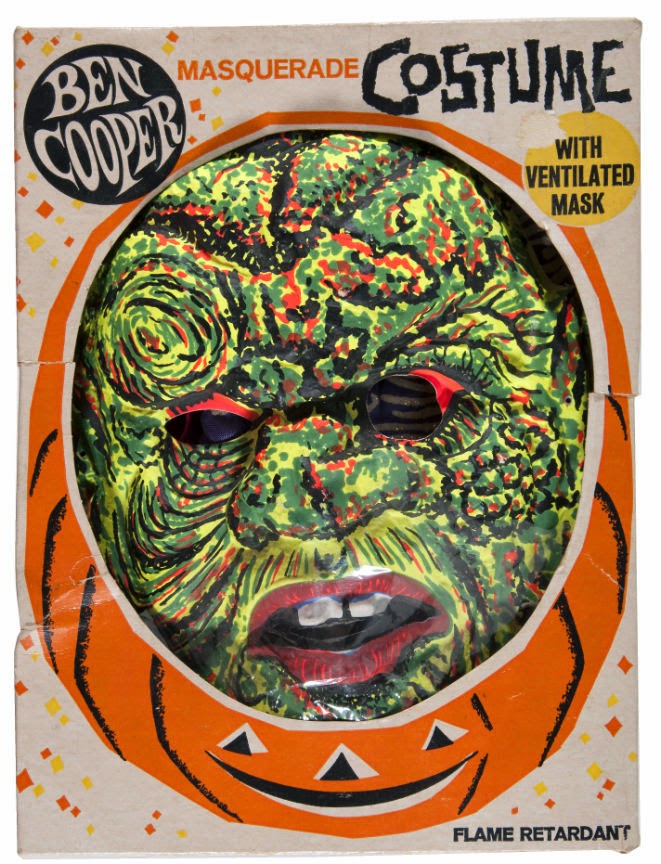 I hope the kid that wore this Outer Limits monster costume got a bunch of candy and also a few screams from grossed out 1960s moms! 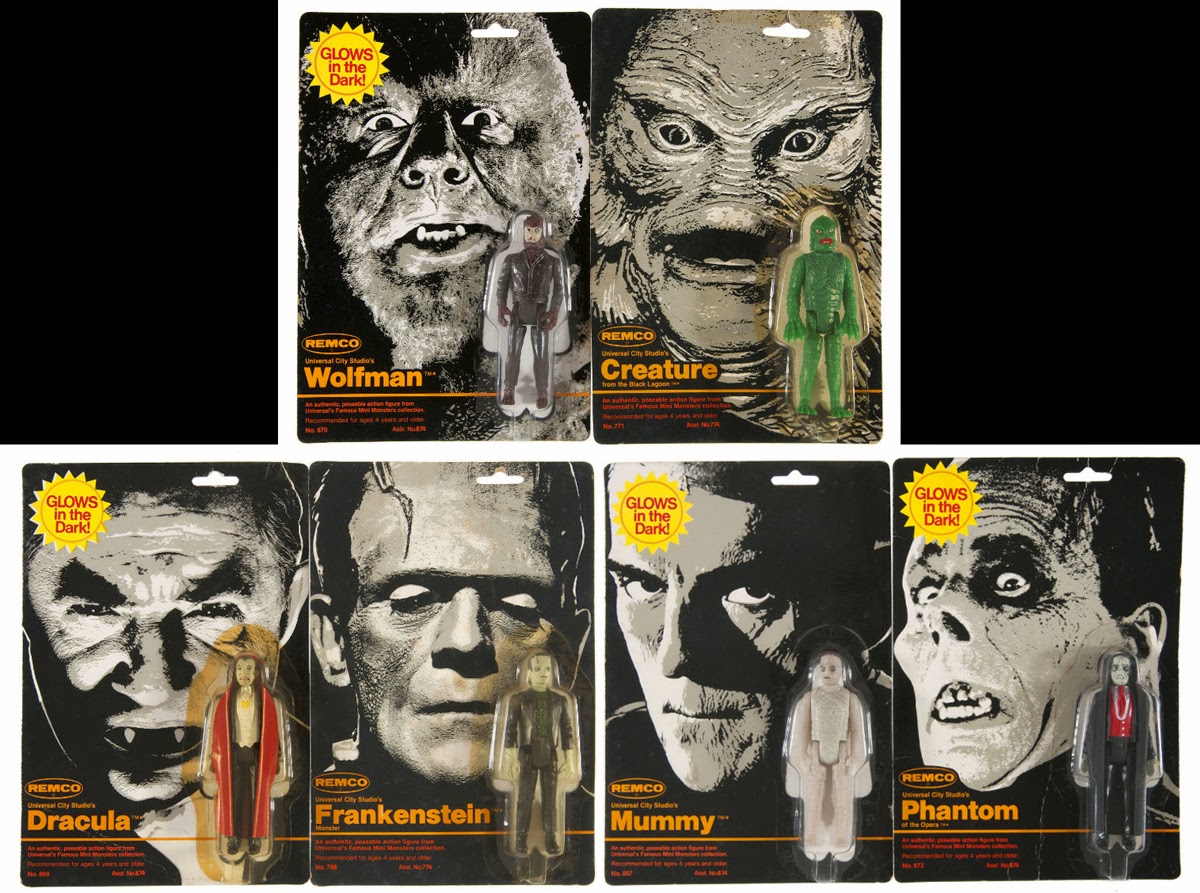 Such a classy line of action figures and a set that's gaining in value each year. Also, the Wolfman worked perfect, back in the day, as an extra figure for the Star Wars Creature Cantina playset! 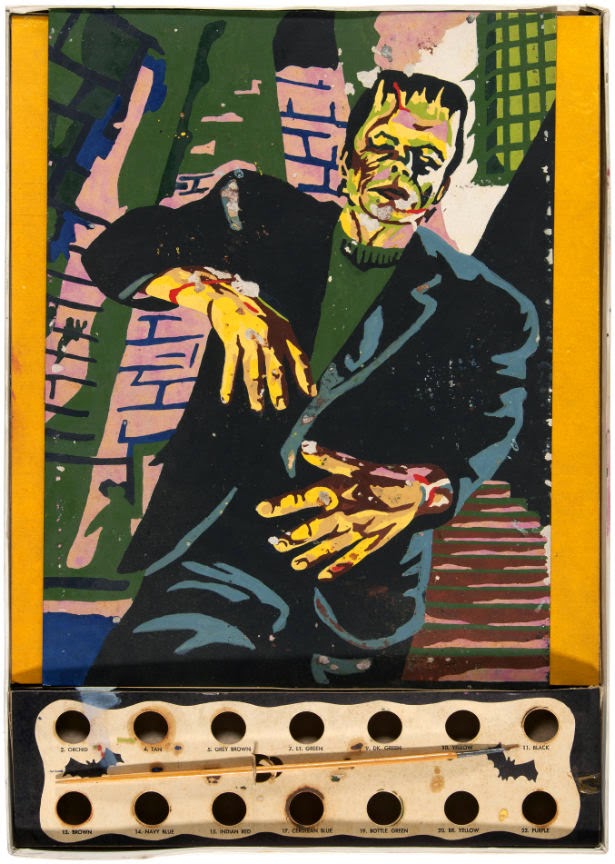 Wow! There were Universal Monsters paint-by-numbers sets?! I love paint-by-numbers and I didn't realize that Hasbro offered them back in the 1960s. Hake's has three boxed sets in individual auctions. Besides Frankenstein, there's Wolf Man and Dracula. These sure beat the boring old farm and pony set you always see in flea markets! 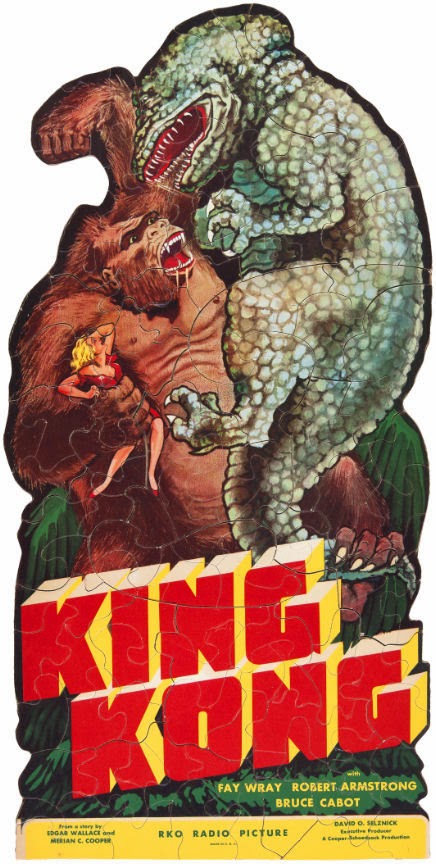 Now this is nice to see! About twenty years ago, I saw one of these at a comic book show and ever since I've always admired this amazing piece. Truly, this is the 8th Wonder of the Collecting World!

It was difficult only showing thirteen when Hake's has a ton of other neato cool items up for auction, but you'll just have to investigate auction #213 for yourself.

(By the way, this post is not sponsored by Hake's in anyway. I just enjoy looking at all the amazing items up for auction. Just saying.)

There is a 200 page book on Amazon that is a history of Aurora models. The price looks pretty steep for it and after watching it for a while I took the plunge and bought it. The book is quite good and heavily illustrated.

Regularjoe - Sounds cool, I will have to check that out. Thanks!