It has been a dry run for me in the way of finding found Halloween photos, but I did manage to buy a collection of slides this past spring. Within the collection are these five slides from an adult Halloween party from 1966. Not sure of the location, but since the photographer was from St. Louis, it's a good chance these 1960s Halloween hipsters got their freak on in ol' Saint Lou.

Now let's have some made-up fun and jump in the Neato Coolville time machine and meet these Halloween party people! 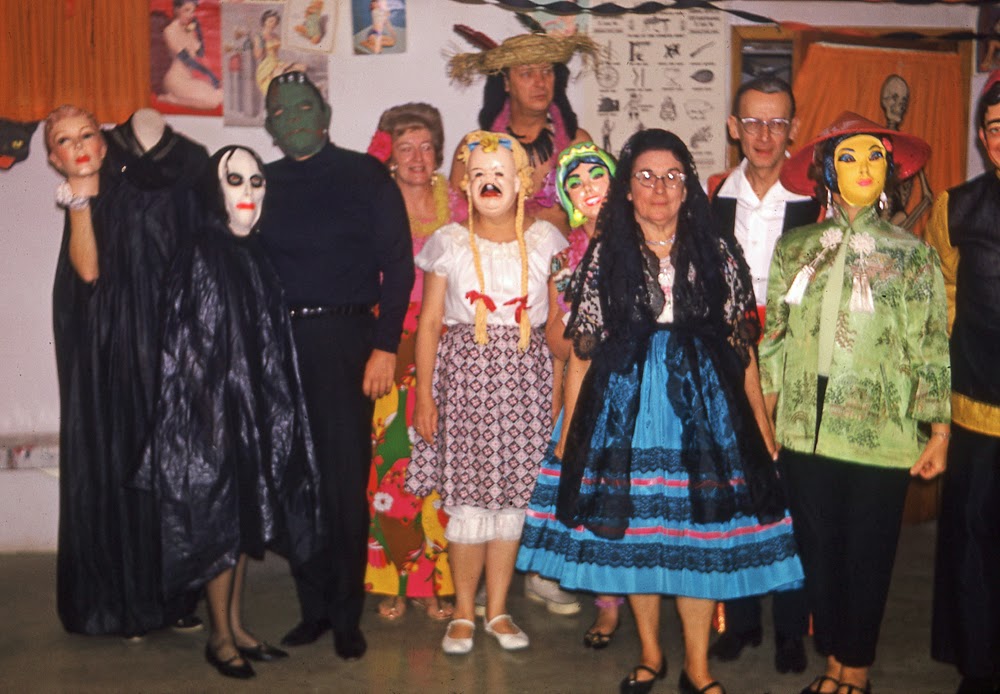 Such a motley crew of Halloween hooligans ready to party the night away! Whoop! Whoop! 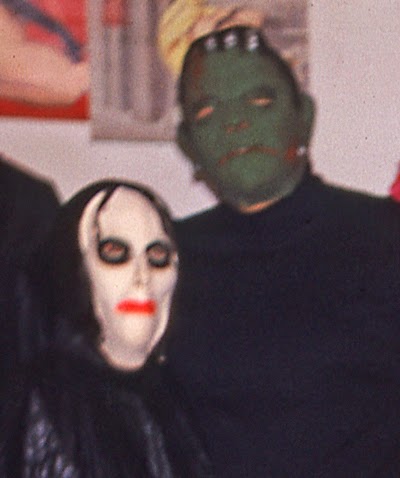 Here's Mr. & Mrs. Topstone, straight from the back pages of Famous Monsters of Filmland magazine. I hear they can cut a mean rug on the dance floor. Mr. & Mrs. Topstone are the ghost hosts of this swingin' party in Mr. Topstone's rec room. 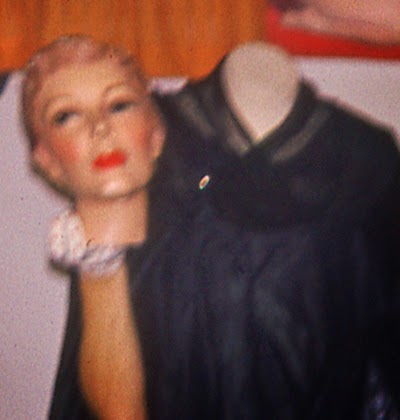 Ms. Macy Headless. a good gal, but she's a bit absent minded. That one is always losing her head, especially after a few Bloody Marys.

Poor Miss Little Crybaby. Not sure who invited her to the party, because she's such a party pooper. The littlest of things will start the water works with this girl. I think someone spilled her Shirley Temple! 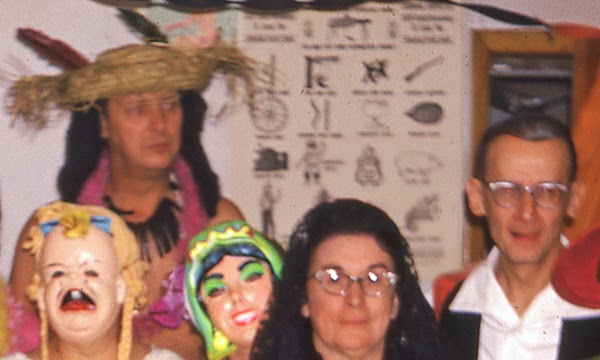 The tall guy with the hat is Paul Beachcomber. He's not happy at the moment as he glares at Roger Ricardo, the guy with the slicked back hair and glasses. Paul has been at odds with Roger ever since '59 when Roger stole his girlfriend, Pearl the Flamenco dancer. 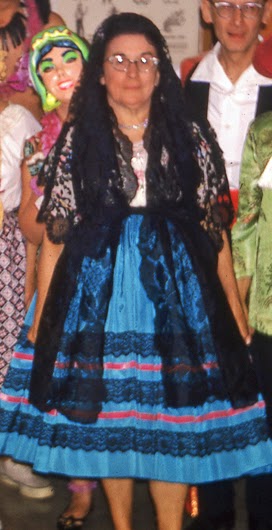 Pearl the Flamenco dancer was the catch of a lifetime and Paul let her slip through his fingers like sand through an hourglass. 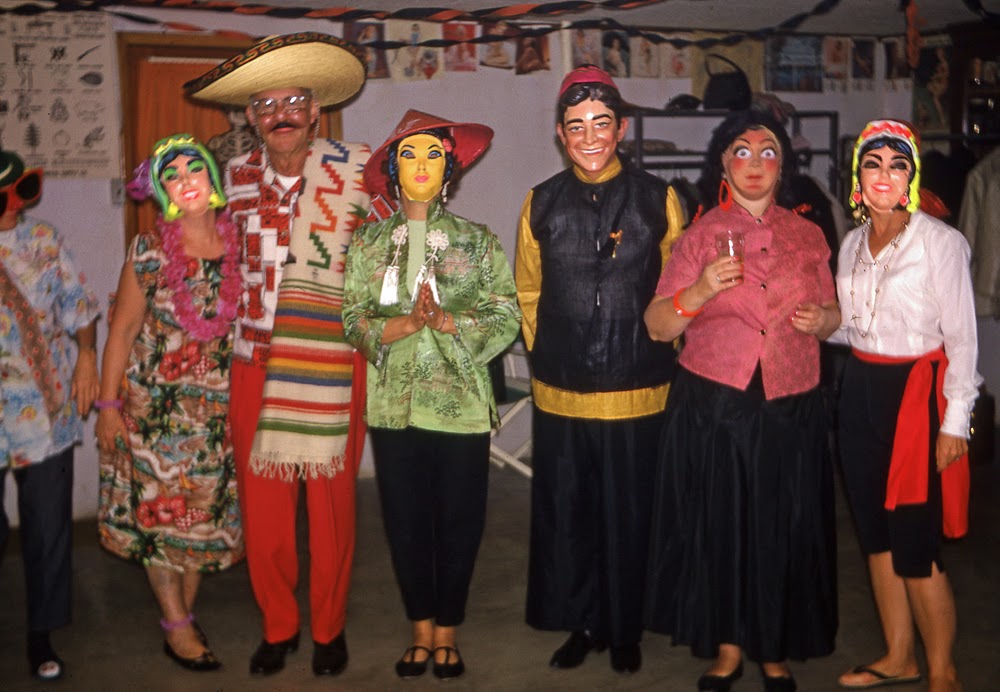 Let's meet some of the others at this Halloween party. 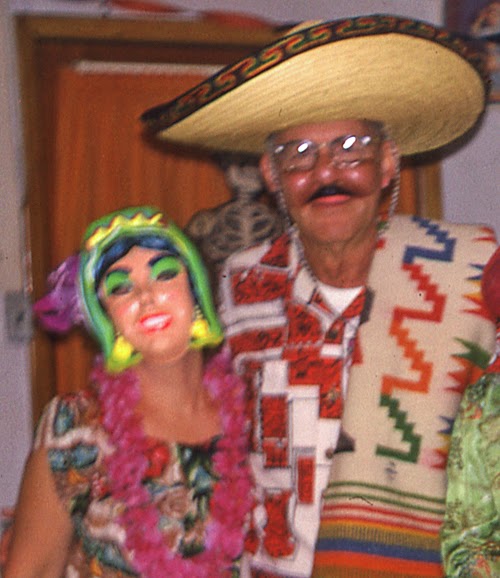 That's Mr. Not-so-speedy Gonzales and his girlfriend Fernanda Plasticface. They will leave the party early because Mr. Gonzales will attempt to open beer bottles with his mouth and in turn break out all of his front teeth. At least he will leave his hat for Pearl the Flamenco dancer to do her famous forbidden hat dance of love. 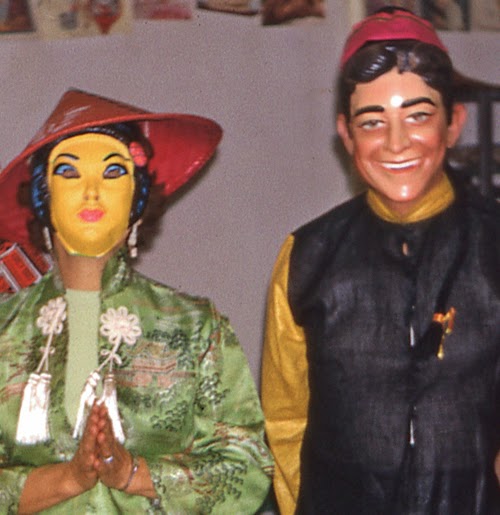 Here's Mr. and Mrs. To Wong Foo. At first, I thought Mr. Foo was that antique dealer guy who wanted to buy Mayberry's civil war cannon on The Andy Griffith Show. So uncanny, they could've been brothers! Mrs. Foo will entertain all the guests with her invention of the "Me Chinese, me play joke" joke. 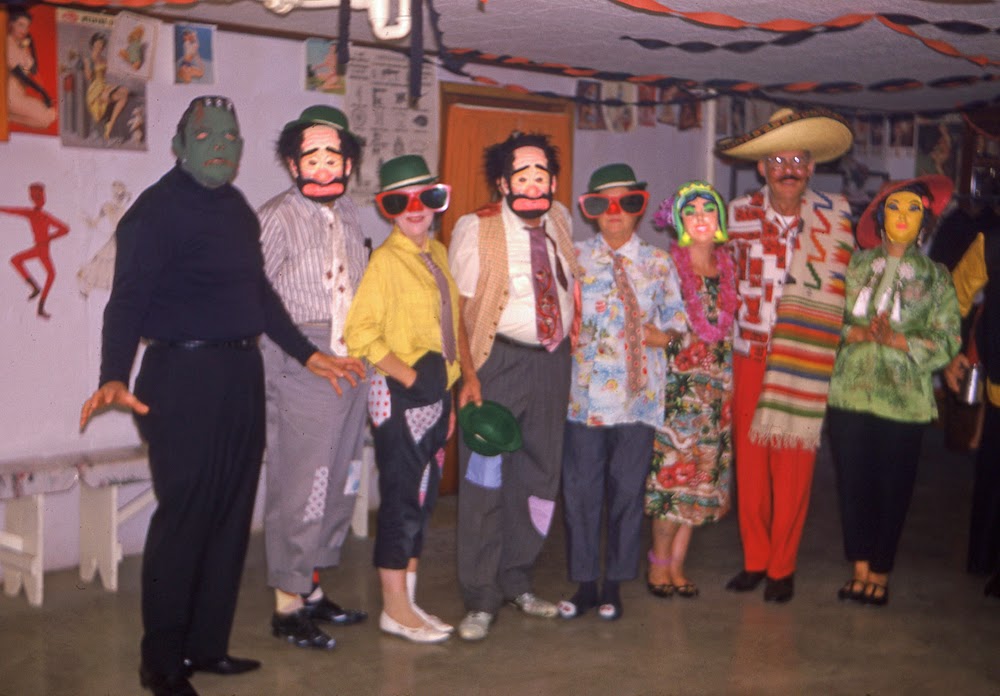 We see in this next slide, that Mr. Topstone is tired of picture taking and just wants to dance. Grrr! 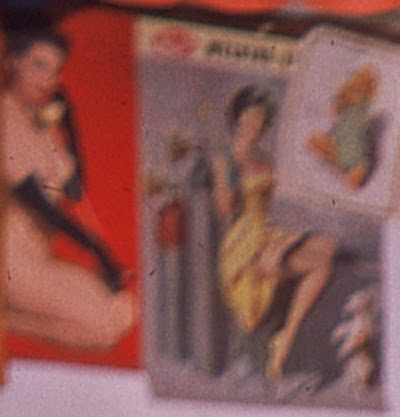 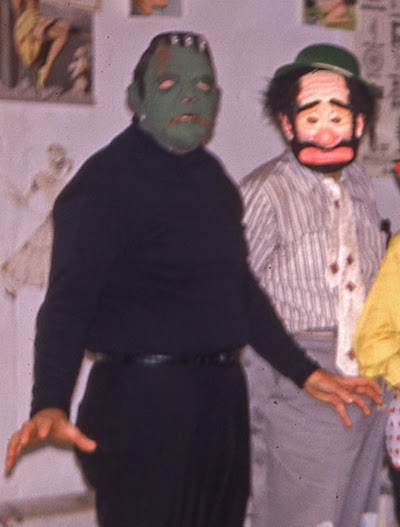 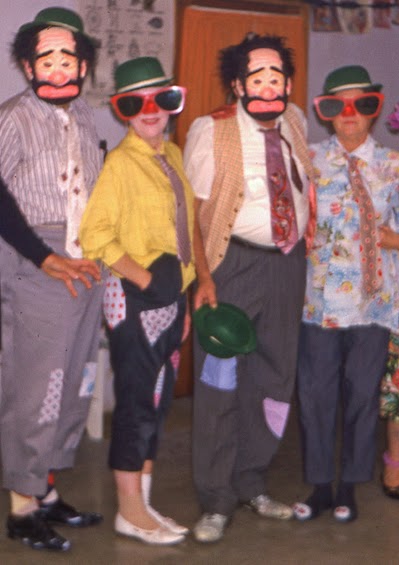 This group just showed up uninvited. I think they're real hobos looking for booze and party snacks. Someone throw a bottle cap in that one guy's hat. 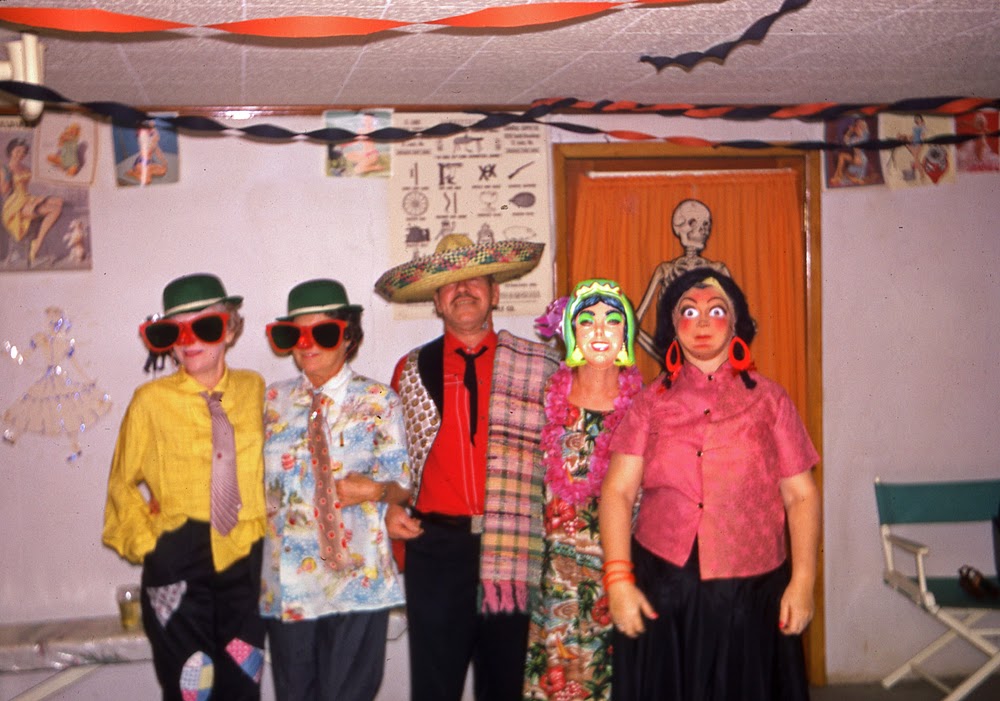 Hey, wait minute! Who's that guy in the middle wearing Mr. Not-so-speedy Gonzales' hat and hanging out with his girlfriend Fernanda Plasticface? 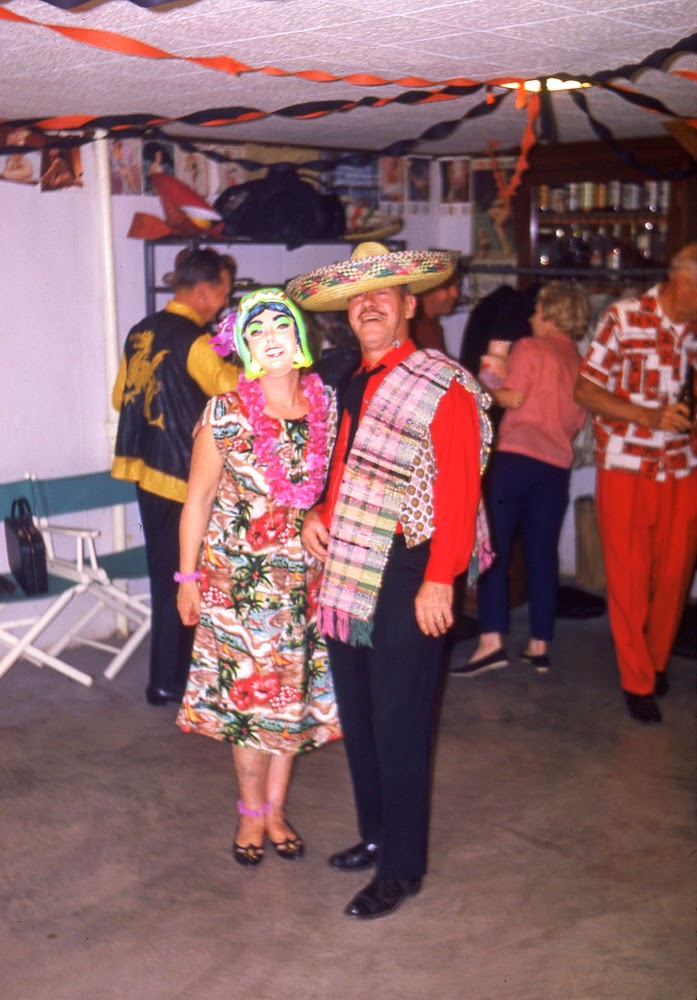 Oh oh. Looks like we got some party drama going on as Fernanda Plasticface didn't leave with the toothless Mr. Gonzales after all. Instead she's hooked up with Sam Redshirt. He's the local butcher and supposedly real smooth with the ladies. Good thing this is the last slide because things might have been too scandalous for Neato Coolville. 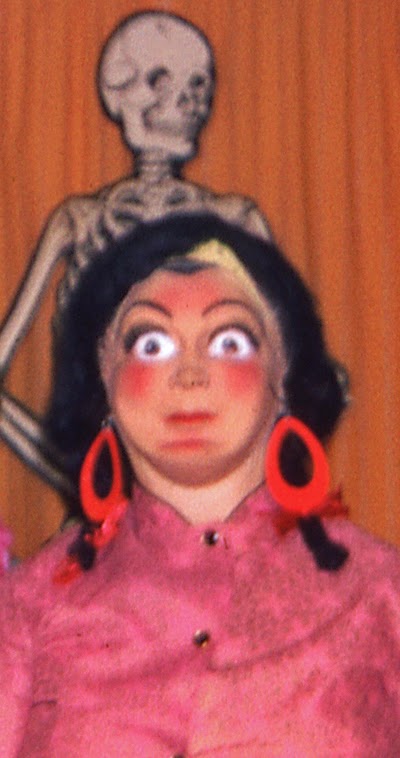 Oops. I almost forgot Miss Bigeyes Surprise! She sees everything, don't you know? All the party shenanigans will be all over town before the last of the spirits are poured. Egads!

I hope you enjoyed my silly slide captions. It's always fun to make something up about total strangers from a different era.
Posted by Mayor Todd Franklin at 12:00 AM

Wow that last one is creepy

Tremendous find! I wonder if the party was as fun as it looks. I wonder how well I would have gotten along with the Topstone couple considering their taste in masks in impeccable.

Karswell - Mr. & Mrs. Topstone will be pleased to know they're awesome!

Kirk - If you could crash the Topstone's party, I'm sure they would have welcomed you. Your mask choice probably would have been much better than those hobo freeloaders.