THE PUMPKIN SMASHER : AN INTERVIEW WITH ANITA BENARDE

During the 2010 Halloween countdown, I put together a simple post on The Pumpkin Smasher book. I had found a used copy earlier that year in a small flea market. For me, it brought back faded memories of checking out this Halloween book from our elementary school library. Naturally, I was thrilled to add this to my collection. Fast forward to 2013 when I got a nice email from The Pumpkin Smasher creator herself, Anita Benarde! She informed me of the good news that The Pumpkin Smasher was back in print and available on Amazon. (Click here to buy your own copy!) How cool is that? Well...that's neato cool!!! Okay, I better just cut to the chase because I'm itching to share this interview with Anita Benarde. It was conducted through email on September 28, 2014.

Anita is an accomplished writer, artist, lecturer and curator. Her artwork has been shown in countless galleries here in the United States and abroad. Currently, her fine art is on exhibit at the Arts Council of Princeton, the Delaware & Raritan Center and the New Jersey State Museum of Art. Click here to visit her website for a small sample of her work. Before her success as a fine artist, Anita created the much beloved children's book, The Pumpkin Smasher. This Halloween tale from 1972, is about a town that's tormented by a pumpkin smashing bully. The town must stop the culprit and save Halloween. (Someone needs to turn this story into an animated TV special!) 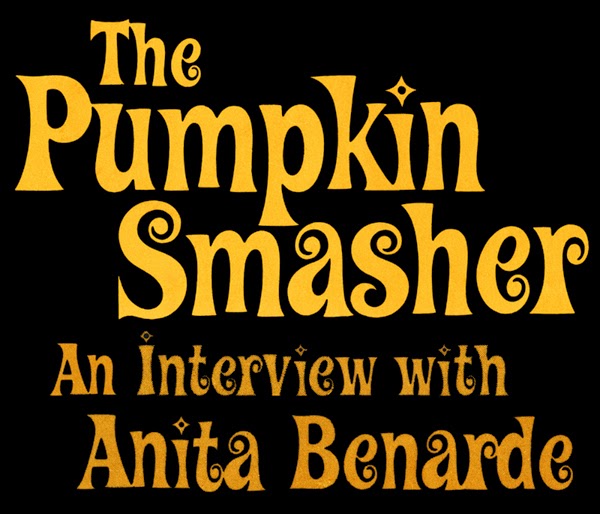 Before we get into The Pumpkin Smasher, tell us a little about yourself.

OK, I never could decide on “what I wanted to be….” My family all loved to sing. We were big on music and dance. My brother even composed theater music. Mother studied voice and so did I. My brother was big on theater and Dad was an electrical engineer but really wanted to be a "song & dance man." My father was born in New York and my mother in South Carolina. I was interested in art and started writing when we moved to Princeton. I guess you could say the family was really interested in music. Our grandsons Zach and Jake are into music in various ways and our son Scott was a music critic in Florida for many years.  Zach lives in Brooklyn and is firmly planted in that music scene.

How did the idea for The Pumpkin Smasher come about?


My husband became a professor at Rutgers University in 1960 and we moved to Princeton, N.J. with our 3 children. We lived in a cul-de-sac where everyone celebrated Halloween big time. All the adults dressed in costume, planned funny tricks for the occasion and everyone had a painted, carved or decorated pumpkin on their front lawn...no matter how big or small. Things were aglitter all around for a while and then someone or something started SMASHING all the pumpkins. It really was exciting until that moment. I was determined to do something about it! So I wrote THE PUMPKIN SMASHER. 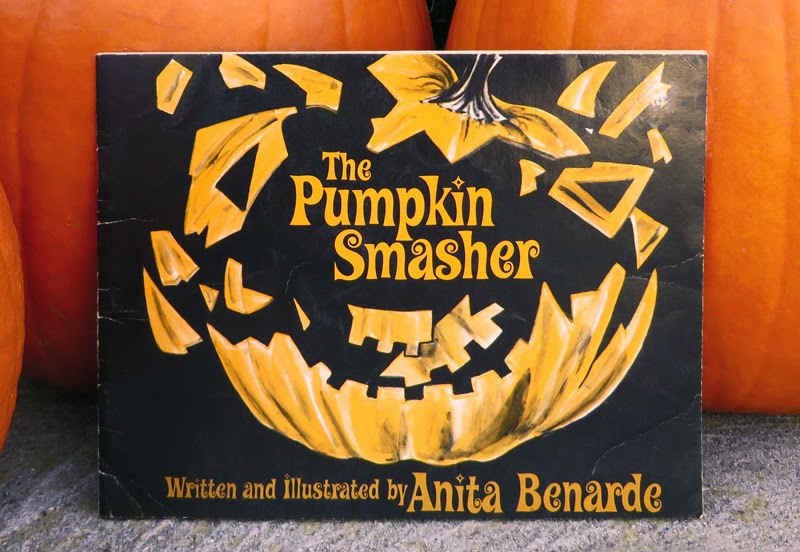 Walk us through the process of making The Pumpkin Smasher from the type of art medium to getting the book published.

Things were, of course different in the 70s. When it came to book publishing, I reached editors just by calling up and trying to talk to someone who might be interested in listening and hearing my story.  I was persistent! Never gave up! I had a story to tell...maybe a “bullying” story! Why would anyone think destroying all those beautiful pumpkins would be fun? Finally after many phone calls and visits to a few publishers, Walker & Co., New York City agreed to have it printed. Now I had to do all the illustrations. That was fun! Color overlays, size, how many? Today, illustrations are all done digitally. But today it is very difficult to reach editors and most publishers want you to have an agent. The trick is how does one get one...and a good one. I’d suggest try your luck. Just keep trying ways to get to an editor.

Any “deleted scenes” or art that didn’t make it into the published book?

I don’t really recall exactly. Laying out a book can be done with a good editor…changes made that can make everyone happy.

Is the fictional town of Cranbury based on a real town?

It really happened in Princeton, but Cranbury is a nearby town. I thought it had a Holiday ring to it.

In the dedication you mention the “terrible” Elfenbein twins. Were they the inspiration for the terrible Turner twins?

My brother and his wife just had twins…a boy and a girl, so I thought it was one way to have a boy and a girl find the answer for the problem. The reissued book is dedicated to all my grandchildren. Life plays funny tricks!

Even though the book is nostalgic for past readers, it also has a modern feel with its diverse characters and the subject of dealing with a bully. Can you elaborate on this?

I really think the story is very much "today." I think it’s about a “bully” smashing pumpkins and not really caring about how much time it took to decorate them, etc.. And the entire town gets together to solve the problem. If you analyze it further, a main character, Mrs. Patchett is a person of color as well as some of the children. That wasn’t done in 1972. I just thought it was right I guess. Didn’t consider it strange. Believe it or not...remember the story was partly true. 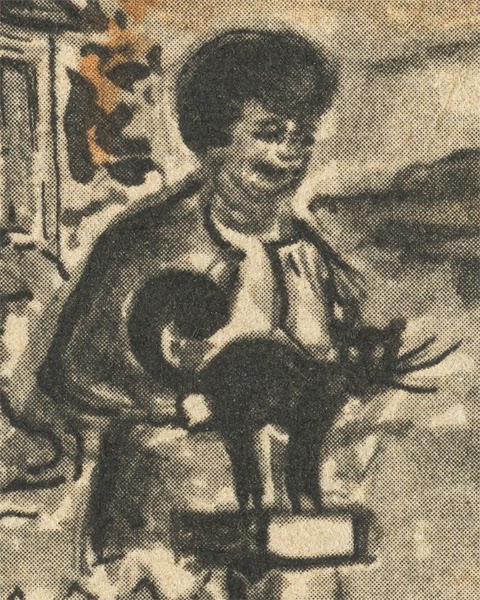 Somethings change and somethings stay the same. Who knows which is going to do what? I’ve been here a long time and I still can’t predict “the which or the what.”

At the end of the book on the “trick or treat” two page spread  we see two dogs. Were they based after pets that you owned.

Yes, we had a Beagle. Her name was Monster believe it or not!!!

What do you think the Pumpkin Smasher Witch is up to today? Is she still tormenting towns by smashing pumpkins or did she give up her wicked ways?

There will always be little witches who think they are funny or clever, and who scramble for attention the wrong way. Once they realize there are better ways to grab the brass ring, they’ll stop the nonsense.

The Pumpkin Smasher is fondly remembered and it’s great the book is now available once again. How did this new edition come about?

My grandson, Zach, in his 20’s, after perusing the internet, noticed several requests for THE PUMPKIN SMASHER. We decided to look into it and WOW, SOOOOO many people across the country were looking for it. The paperback was selling for a huge $95 and the hard cover was available for $350 - 400.  And so my daughter helped me reissue it on CreateSpace.com and Amazon.com

You have some exciting news that The Pumpkin Smasher will now be preserved in the archives at Princeton University. What’s the scoop on this?

Princeton University had an International Children’s Book Conference and I decided to see what it was all about. I met the librarian and the rest is history! For all those years I had saved editor’s notes, jacket cover film (the illustration film was moldy and thrown out), some of the original illustrations, the “blues”, the original books etc. are in the archives at Cotsen Children’s Rare Book Collection at Princeton University.  They are so happy to have a perfect example of the way children’s books were done at that time. The only one they have!

Also, Johnson & Johnson bought a few original illustrations for their Children’s Gallery when it first came out.

Have fun always! Thanks Anita. 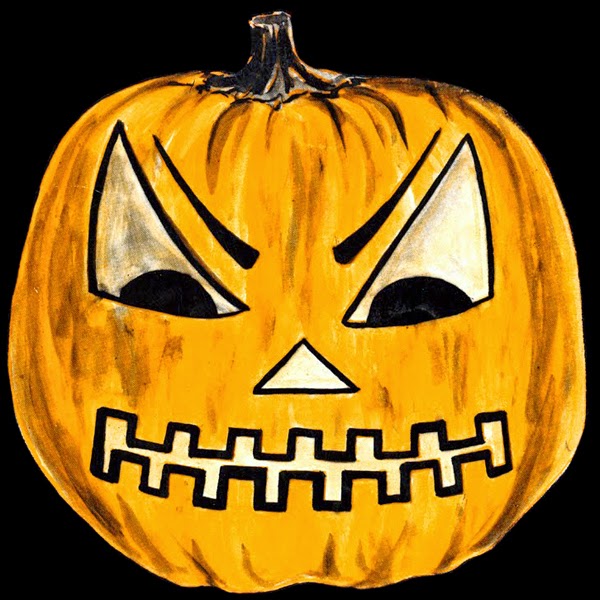 Big thanks goes to Anita for taking the time to share with us her thoughts, info and stories about this classic Halloween book. I encourage everyone to go and pick up a copy of The Pumpkin Smasher. A fun treat for all ages and it will absolutely put you into that old Halloween spirit!
Posted by Mayor Todd Franklin at 12:56 PM

I picked up that book last year at a thrift shop. I didn't know at that time, that it was going for a pretty penny online. So when I went to price it, I found the least expensive one for sale, and I cut that price in half and that's what I sold it for ($35) It was a cool book and I wanted to make it affordable. The lady who bought it wrote me a note that her daughter wanted that book for years, but it was always too expensive, and she was so grateful to find an affordable copy in my etsy shop. I love the retro illustrations in The Pumpkin Smasher! great interview!

Thanks for commenting RandomGoodsVintage! That's great it went to someone wanting to relive a memory.