THE EMPIRE STRIKES BACK: SEEING THE FILM FOR THE FIRST TIME

Just like with Star Wars, our town had to wait until August to see The Empire Strikes Back. For me who was already a Star Wars nut, waiting for one of our local theaters to play the sequel was agonizing. May 21, 1980, the official opening came and went and no Empire. Ug, the TV spots were all over the tube and every kid in America & UK was getting a lesson in Skywalker genealogy. (Amazing I didn’t find out that Darth & Luke were father and son and until I saw the film.) In June, my tenth birthday rolled around and I received a handful of Empire trading card packs. I appreciated the packs very much, but really it was a cruel reminder that I still hadn’t seen the film. Oh the humanities! As the days flew off the calendar, I kept checking the theater listings in the newspaper and week after week a different movie was listed instead. Summer was disappearing fast and I was certain that any day Stormtroopers would arrive at my house and revoke my Star Wars Fan Club membership card.

The month of August arrived along with a new hope as I just knew that Empire would soon be coming to a theater near me. Heck, I probably added a request or two in my nightly prayers! On the seventh day of August my wish came true and The Empire Strikes Back was scheduled to play at the Lake Cinema in Lake Ozark, Missouri. 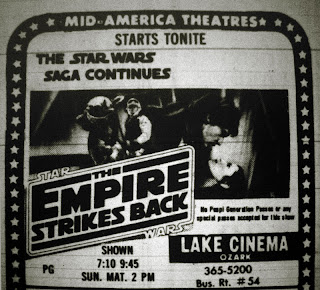 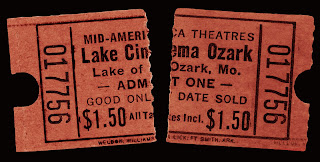 Yippee, the day I’d been waiting for was here. Too bad, that on this special day I was sick. Yep, a good old stomach ache knotted up my tummy. Of course I did everything to fake my illness and tough it out. Really, I’m surprised I didn’t throw-up in the theater. I did take precautions and took an aisle seat just in case I needed to make a mad dash to the restroom. Between not wanting to miss a frame of film and not wanting to use Lake Cinema’s gross toilets, I made it thru the whole movie without getting sick. Sometimes waves of pain would surge thru my stomach and it didn’t help that I was shivering from the theater’s ice cold AC and planet Hoth on the screen.

The movie was so good that by the time Yoda uttered, “Try not. Do, or do not. There is no try.”, I forgot about being sick or at least until the credits rolled. The Empire Strikes Back remains one of my favorite movies of all time, but my first time seeing it, was one the most miserable movie theater experiences of all times.

That being said, it was worth the wait! 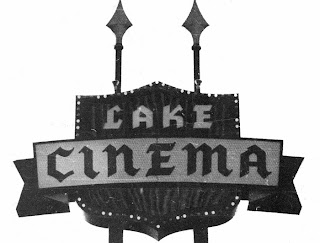 Lake Cinema closed sometime in the late 1980's and here's a photo I snapped back in the early 90's, just before it was remodeled and turned into a boat marina. 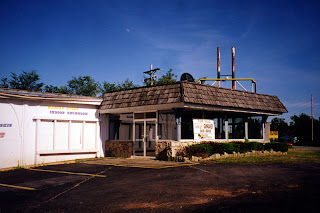 No offense intended, but the cinema looks like it could have a Hardee's attached.

You have a ticket too! I just recently found my ticket to see Return of the Jedi, my favorite of the three!

I remember seeing Empire that summer vividly too, but not to the detail you do! I do remember very well that the whole freezing-in-carbonite thing really messed me up. I found that the most horrifying thing I'd ever encountered.