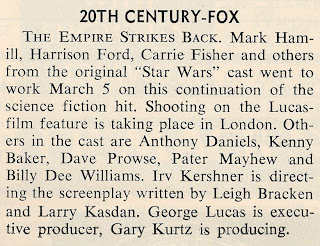 The above clipping is from the April 30, 1979 issue of Boxoffice magazine.

My pal Mike Middleton sent me this Kansas City, Missouri newspaper ad for the August 15, 1979 re-release of Star Wars. Attached to the film was the first Empire trailer to show footage from the sequel. 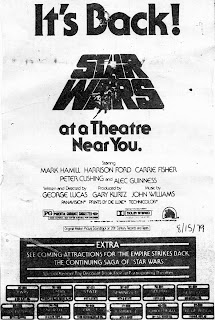 You'll notice in the hard to read fine print that fans were given Kenner Toy Discount Books.

Click here and scroll down half way and you'll see the the Kenner Toy Discount Book. Be sure to click on page one to read the rest of Pete Vilmur's 2006 Star Wars Theatrical Experience article at Star Wars.com.

I remember wishing I could win this Kenner Sweepstakes when I was a kid. Below is the flyer that I saved from childhood. 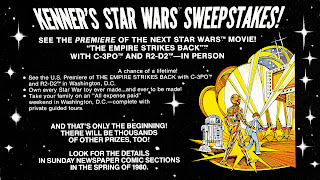 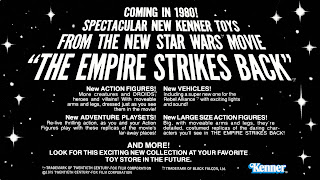 Wow, that would have been the ultimate! I wonder if there's any snapshots or newspaper articles about the kid who won? I'd like to see photos from the event with the winner walking in with C-3PO and R2 just like in the illustration. 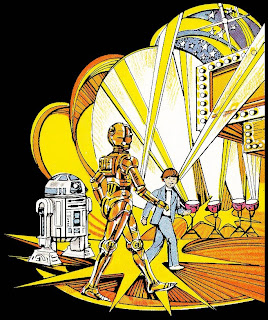 The closest is this photo from the 1980 Toy Fair Catalog as seen on the Star Wars Collectors Archive Site. Also, you can see a very tiny photo of the sweepstakes newspaper ad by clicking here. It was on display at Kenner's 1980 Toy Fair booth and is the one on the right.
Posted by Mayor Todd Franklin at 12:02 AM

I forgot about that sweepstakes. I wanted to win it in the worst way. Great Carmine cover too.

John Rozum said...
This comment has been removed by the author.
10:36 AM

I too wanted to win that contest in the worst way possible. I still have my flier and, I'm pretty sure, the discount book. Nice trip down memory lane, Mr. Franklin.

The buildup to The Empire Strikes Back brought in a whole new era for cinematic anticipation and marketing.