THE UNMASKING OF THE ROBOT KIDS

I’ve collected old “found” snapshot photos for years and each one has a story to tell, but these stories are usually hidden from us as most photos never come with provenance. Most of the photos in my collection have been found at flea markets, auctions and on ebay. It’s fun to speculate and even make up stories to go along with the images, but most of the time these photos haunt me with questions of why in the... where in the... and who the...? This time I have a special treat on Halloween for all of you snapshot fans. I have the true story behind one of the most popular snapshots I’ve ever posted. 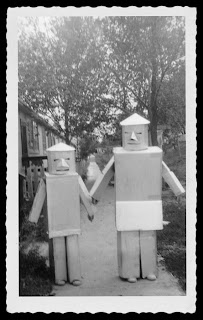 I posted a snapshot I simply titled 1950's Halloween Robots on flickr back in 2006. This photo has been marked as a favorite almost 100 times and that’s more than any photograph, scan or snapshot in my photostream. Though I can’t call this a found photo, but more of a borrowed one as a close friend let me scan this photograph that her dad snapped many years ago. This year, she let me scan the unmasked photo, which you’ll see at the bottom of the page. First, here’s the true story about the photo.

In 1958 in the small town of Igloo South Dakota, 49 years ago today, two kids, Allie and Lance were transformed into robots thanks to their creative dad. He spent hours cutting cardboard, taping edges and brushing on silver paint so his children could look like they had just stepped off of the movie screen at the Hipsher Theater during a Saturday Matinee.

The kids were excited to don their costumes and they fit like a glove, a stiff glove that made it difficult to walk. But these kids didn’t care as they had the coolest costumes in town. After they had their photo taken, they left for a Halloween Kiddie Parade where they were a big hit with all the other kids. It wasn’t until early evening during the first few houses of trick or treating that the kids had a hard time maneuvering inside their cardboard shells. The little robots started to malfunction as Lance kept running into stuff and poor Allie kept falling down. Because of safety concerns, they called it a night. It was no big deal that they didn’t get much in the way of candy and Allie says she wouldn’t trade their special “handmade with love” robot costumes for all the treats in the world!

This is the photo of the little robots unmasked and frozen in time, forever anxious for Halloween to begin! 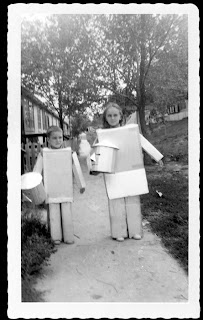 Thanks Allie for sharing your fun memory and wonderful snapshot with all the Neato Coolville readers.
Posted by Mayor Todd Franklin at 1:01 AM

Those could not have been easy to walk in, not to mention getting up onto porches for trick or treating. Thanks for sharing - and analyzing - your collection this month, Todd. Happy Halloween!

Your Halloween countdown has been thoroughly enjoyable. Thanks much and I look forward to next year's countdown.

What a wonderful dad they had, and what a sweet story. Thanks for sharing that.

Thanks also for a great Halloween countdown! You helped make my October so much more exciting and fun.

Stephen - I hope you and your family had a fun Halloween too!

Steve - Glad you enjoyed this year's countdown. I better start digging now for next year!

Dane - Nice to hear and thanks!