Much has been written about the Star Wars action figures and I really don’t have much to add, besides a few of my memories and some recent photos inspired by one of the Kenner toy catalogs. 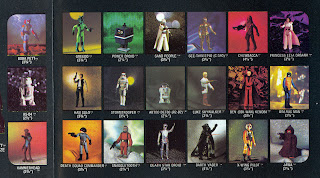 I got my first three figures as a birthday gift from my Aunt. They were Darth Vader, C-3PO and R2-D2. They saw heavy playtime action and each one has a story. First, C-3PO was injured when my big brother threw him against a rock breaking off the tips of his fingers, next R2-D2 fell in the mud and soiled his sticker and then Darth Vader was lost for more than ten years.

Threepio and R2 survived and Vader was found in the late 80's in a box of magazines that had been stored away since 1978. I have a complete set of figures, the early bird kit/set, mint in package figures etc., but these three are my most prized figures. Starting today, I'll be adding three photos of three different Star Wars figures from the first 21 that were released. 3 per day up to the last day of 30 Days for 30 Years. 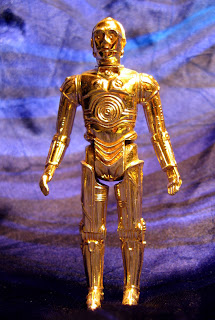 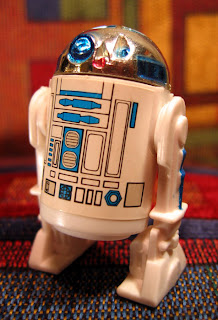 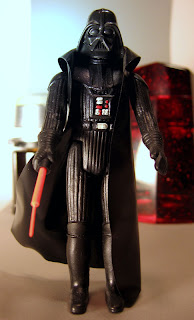 Posted by Mayor Todd Franklin at 9:21 AM

i'll have a blue milk in your honor.

Tell the truth NC. Pat broke your Threepio's hand just a few weeks ago right? Great post. My Artoo looks remarkably like yours. My disaster was Han Solo's head getting run over by a lawn mower and Leia's head falling off after crashing in a toy race car my dad had. Yes, Luke and Leia were driving around in a toy Indy Car. I'm quite ashamed. This must have been before I got my Landspeeder.

Mike - Things never change! Yeah, I had Luke and Ben riding around in FP Adventure People jeep, before I got a Landspeeder.