STAR WARS FOR THE SECOND TIME 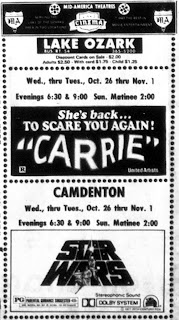 I saw Star Wars a second time on Halloween night in 1977 at the Lake Cinema. I remember after trick or treating, my grandma took us kids to see Star Wars, as she hadn’t seen it yet and I’m sure she wanted to see what the fuss was about. My costume that year was Snoopy and the fun thing about seeing a movie on Halloween night was that we got to eat our candy loot while we watched the movie. (Unfortunately, I don’t have any photos from Halloween as a kid)

The Lake Cinema was located in Camdenton, Missiouri, which is part of the Lake of the Ozarks. I saw many flicks over the years at this theater and unfortunately, it finally closed sometime in the late 80's. The building still stands, but it's now a mattress store. 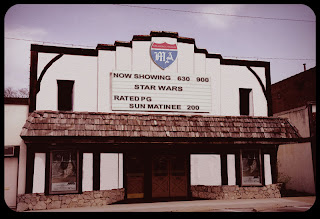 Also, here’s a scan of a ticket stub I saved from the early 80's. 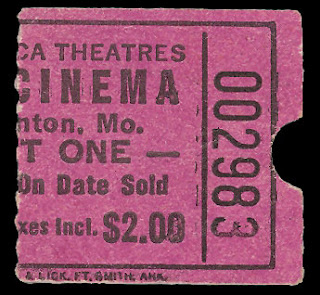 Posted by Mayor Todd Franklin at 9:29 AM