Today, Neato Coolville is proud to have Mike Middleton posting his memory of the first time he saw Star Wars. Mike's one of my best friends since our college days.

Take it away Mike!

Like many people my age, life changed for good on May 25, 1977. In my case though, it was one day later that my then six (almost seven) year old self experienced a childhood changing event. Star Wars opened in 32 theaters across the country on May 25, but in the Kansas City area it opened a day later for some reason. As an early birthday (my birthday was the 28th) present, my dad decided to brave the crowds and drive out to the magnificent Glenwood Theatre to see this new movie the night it opened. 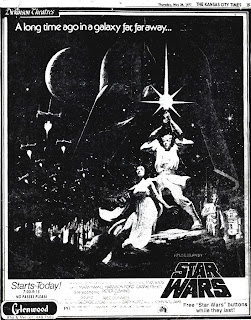 The Glenwood was the Kansas City area's crown jewel of movie theaters. Located in the suburb of Overland Park, KS, it opened in 1966 as part of the Glenwood Manor motel and convention complex. Featuring an ornate chandelier in the lobby, the Glenwood had around 800 or so very comfortable seats facing the largest screen in the Kansas City area. The gigantic gold curtain that covered the screen before showtimes just hinted at what was to come.
By the mid 70's, Dickinson Theatres, who owned the Glenwood, added an additional screen right next to the main auditorium. It was very similar to the big theater but held about 500 people. It didn't matter to me where I saw it. I just could not wait. I had seen one of the trailers at another movie about a month earlier and I just could not stop thinking about this great new movie.
Needless to say, I was not disappointed. I sat perfectly still from the 20th Century Fox logo to the tail end of the credits. My dad was amazed because I was a very hyper child and to get me to sit still for two minutes let alone two hours was amazing to him. My favorite characters right off the bat were Darth Vader and Han Solo. That whole blockade runner sequence at the beginning is still my favorite part of the movie 30 years later. 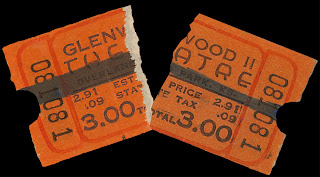 Star Wars stayed exclusively at the Glenwood until Fall. I went back and saw it a couple of more times that summer. Seeing it mutliple times was even more exciting. I couldn't get enough. There will never be a moviegoing experience that will compare to that first night in 1977.
The Glenwood stayed the most popular theater in Kansas City until 2000. They added two more screens in the early 80's that prolonged the financial life of the theater. I saw many movies there through the years and there was always a big crowd. The growing popularity of multiplex theaters marked the end of grand old theaters like the Glenwood. It finally closed in 2000. On one of the last weekends it was open, the esteemed proprietor of this blog and I decided to take a souvenir of this place that meant so much to me. We cut up a small piece of the distinctive carpet and took a rock from the rock garden adjacent to screen #2. Sure it was vandalism but the place was going to be torn down anyway so why not? Now it's a parking lot for a Bob Evans which is a gigantic shame. There will never be a movie theater like the Glenwood in Kansas City again. 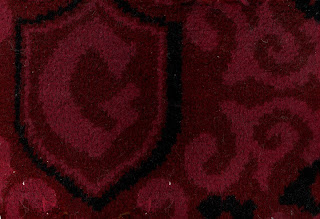 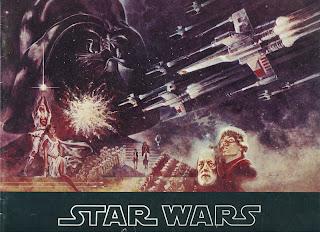 For more info on the Glenwood Theatre check out Cinema Treasures and Cinema Tour.
Posted by Mayor Todd Franklin at 12:10 PM

You would love the Cine Capri theatres. They sound just like the theatre you describe. Harkins is recreating these. They are actually playing Star Wars for a charity screening on Thursday night.

The Glenwood Theater was my favorite theater as a child, and it made going to see a movie such an exciting and important event. It is still the quintessential movie theater in my mind. So sad that it's gone.

Fun stuff. Use to own the old Glenwood. Loved it. A note -0 Redbridge Theatre also had Star Wars. The company booked an east & west run. Two screens. Those were the days...

My wife and I wanted to do something unique on our wedding day...so that night we drove from Leavenworth, KS to Overland Park to watch Star Wars. This was on July 2nd, 1977. I knew Star Wars was going to be an iconic movie in history and there was no place better than at The Glenwood. A magnificent theater and a lifelong memory. We still talk about that night every time something about Star Wars is in the news.