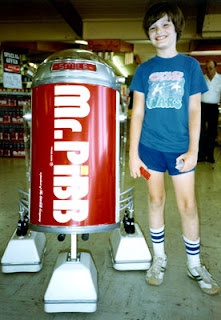 Yep, that’s me, right after I turned 10 years old during the summer of 1980. I’m posing with a Mr. Pibb robot that showed up at our local supermarket, Carl’s Market. 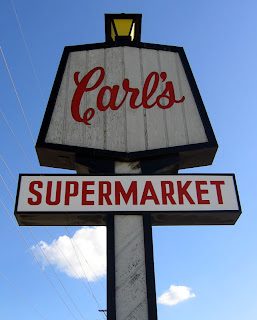 I couldn’t believe they had this crazy robot rolling around that looked like R2-D2. Every kid that walked by had their picture taken with it. The robot talked in bleeps and played a Mr. Pibb jingle. His head would spin around showing the word SMILE, when it was time for a photograph.

Star Wars and Coca-Cola collectors are familar with the Cobot, which was the same style as this Pibbot.

There was also a small remote control Cobot toy that was produced. You can read more about the Cobot here.

Funny that I happened to be wearing my Star Wars spoof shirt that day and that I’m holding four packs of Empire Strikes Back cards in my right hand.

I still have that shirt and here’s a scan of it. It's hard to see now, but the two Star characters are throwing food at one another. Get it? The stars are having a war, Star Wars! Har Har Har. 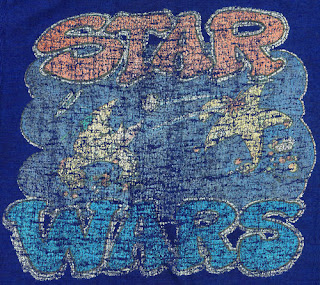 Luckily, those blue shorts are long gone!
Posted by Mayor Todd Franklin at 10:28 AM

Email ThisBlogThis!Share to TwitterShare to FacebookShare to Pinterest
Labels: 1980's, Lake of the Ozarks, Memories from the Mayor, Star Wars, Star Wars 30 Days For 30 Years

Mr. Pibb had a jingle?

Nice finale, Todd. I especially love the flickr links. I wonder if that bantha is still there, or who has it now.

I'm looking forward to the Halloween crossover this year, too.

There's nothing wrong with a refreshing Mr. Pibb!

As Bob Hope would say - "Thanks for the memories!"

I really enjoyed it.

It's been tons of fun this month NC! Thanks for the hard work and making my silly Glenwood post look good. So when's 30 days of Battlestar Galactica?

Stephen - I can't remember it, but it played some type of catchy Mr. Pibb tune.

Mike - Tube socks rule! Again, thanks for the Glenwood post. Instead of 30 days of Battlestar Galactica I was kind of thinking 30 of At The Earth's Core!

John - Yeah, I wonder what happened to the Bantha suit? Yeah, I better get cracking on the Halloween posts. Maybe I'll do a theme this year? I'll have to think about that.

Waffle - Since this month is over, I think I'll have a cold refreshing Mr. Pibb.

Erick - Glad you enjoyed it!

wow! how cool that you have this picture to share. i wish i'd seen that robot. i went with a friend to a christmas party in marin county in 1994 at the house of an art director from the original star wars movies). he had his own art studio behind his pool + showed us a lot of memorabilia. sadly i heard he died in a fire in that house several years later. i wonder if they saved the studio?

Modmom - Sad story about the art director. Do you remember his name?

Of course I have to go on vacation and miss all your excellent posts! Ah, but think of the time I'm spending playing catch up now.

Wonderful run here Todd, and that photo of you is a scream. May the force be with you!