(I’m handing this final episode over to Gus Lopez, the current owner of the Death Star and one of the top Star Wars collectors)

Todd (and his brother, Pat and friend, Tim) deserve tremendous credit for preserving one of the most significant icons of film history, The Death Star. Their story is an interesting one that is now Star Wars legend, and I've been asked about their story many times in tv, radio, and magazine interviews. When Todd, Pat, and Tim decided to part with the Death Star, there were multiple goals they were shooting for, including the ability for others to see this amazing item and to be able to view the piece themselves in its new home.

Having corresponded with them over the years as I had featured their Death Star on my website, The Star Wars Collectors Archive, I was thrilled that we were able to work out something on it that worked for all of us. I had promised that anytime they chose to visit me in Seattle they were welcome to come see the Death Star, and I had no plans of ever parting with it. So when it came time to do the deal in person, I flew to Missouri and got to meet Todd, Pat, and Tim. They took me around the town and walked me through the history of the Death Star discovery stopping at all the places (the antique mall, the music show, etc.) that all had a part in the discovery of this holy grail. Todd had arranged to have the Death Star shipped by a local delivery company that had experience shipping antiques. The Death Star wars carefully packed and crated up and sent to Seattle. Upon arrival in Seattle, I had the Death Star, crate and all, put into our storage unit for 6 months as my wife and I were in the process of buying a house and didn't have space for it in our two bedroom apartment.
As we were house-hunting, we literally must have driven our agent nuts as we were picking houses based on all sorts of constraints to display collectibles, the foremost being a place to show the Death Star. We found the perfect 100+ year old house in a nice neighborhood in Seattle. The house had a foyer that looked almost designed to show the Death Star. 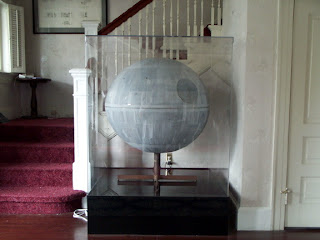 We had a plexiglass case made for the piece, which was a lot harder than it sounds. Several plastics companies said it would be impossible to make a plexi case so large since the plastic would not support the weight, but eventually I found a vendor who worked with me on a design. We built a waffle pattern in black plastic for the base to prop it up. An added challenge was that the front door to our house is about 1 cm wider than the diameter of the Death Star itself, so any plexiglass case that is a cube would not be able to fit through the door! So I designed a case that was U-shaped with a back piece that screws on the back with clear plastic screws. The U-shaped piece hooked around the front door to fit inside and then assembled the pieces in the house. I also connected the Death Star to a light source so it could be illuminated.

Over the years I have done quite a bit of interviews in our house for local and national tv shows. The highlight of each of these programs is always the Death Star and the unique story of its preservation. Three years ago, the Experience Science Fiction Museum opened up in Seattle, which overnight became the largest collection of print, tv, and movie sci fi memorabilia in the world. I knew some of the museum staff and invited them over to see my collection since they were interested in borrowing some pieces for display in their galleries. I loaned them a hand-drawn storyboard from the Empire Strikes Back and my full set of vintage Star Wars action figures, which represent a significant milestone in movie merchandising brought on by Star Wars. The item that was at the top of their interest list was the Death Star model. Initially, I turned them down since I very much enjoy seeing this in our home. I also wanted to have it around for parties and other tv programs occurring in our house through the release of Revenge of the Sith. After the museum had opened for a year, I was impressed with the quality of the displays, and I eventually warmed up to the idea of loaning the Death Star to the museum so that many people could view this item first hand. The arrangement I made with the museum was that if they would cover the costs of making a detailed replacement dish for the Death Star, I would loan the Death Star to them for at least a year. One perk of doing this is that I could return the dish made by Todd's grandmother that had been used as the replacement dish for many years. Through the help of a friend, I was put in contact with a top model maker in Denmark, Morten Moeslund, who made the replacement piece exactly like the original ILM model using extensive photos. You can view pictures of the dish here (following links to "More news"): http://www.m-moeslund.dk/

The Death Star then went on display with a specially-designed case wired up for sound so that when visitors press the button, it lights up the model with a low intensity bulb and plays Imperial March. The Death Star is prominently displayed in the middle of the main prop room, a tremendous compliment to significance of this piece already surrounded by such holy grails as Dr. Zaius costume from Planet of the Apes and the Queen Alien from Aliens. It's amazing to walk into a museum of this caliber and watch people hit the button to illuminate the Death Star and reflect on the significance the Death Star played in the Star Wars movies and their childhood. Many people have commented it's the highlight of their visit to the museum, and the museum staff intend to start using The Death Star in advertising. It's really a piece that belongs in a museum for many to enjoy, however sometime in the next year or two it will come back to our house for more personal viewings to friends. 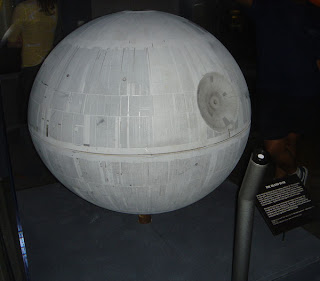 (If you’re going to Star Wars Celebration IV, be sure to say hi to Gus as he will be moderating some not to be missed panels on Star Wars collecting, including a props and costumes panel! Also, a big thanks to Gus for taking time out of his busy schedule for this post and a bigger thanks for being the keeper of the Death Star!)
Posted by Mayor Todd Franklin at 9:20 AM

I would have loved to have seen you keep this NC, but you definitely sold it to the right person. It's great that it's being displayed with such love. This is definitely worth a road trip!

Mike - Thanks! Yeah, I'm glad Gus ended up with it and he's the perfect one to own it.

wow, that's an intesting story on the Death Star.

good to see that it got rescued and has ended up in a good place.

Yeah, it's being well taken care of. Thanks for the comment.

What a fantastic odyssey for such an iconic piece of movie history and kudos to all those who have both wittingly and unwittingly played a part in the preservation of this irreplaceable artifact!