When my dad brought both of these oversized Star Wars comics home, along with the soundtrack album, I was lost for hours. Who needs the latest DVD edition when you can relive your favorite movie thru the pages of a comic book!

These giant comics are called Marvel Treasury Editions and they were super fun to read, especially on the living room floor. As you look at the cover scans of these, you’ll notice that we read them over and over. I’m surprised the covers are still intact.

The first issue reprints the first three Marvel Star Wars comics and the second issue reprints four, five and six. They were written by Roy Thomas with art by Howard Chaykin and Steve Leialoha. 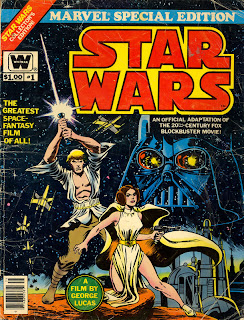 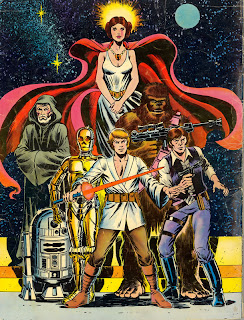 Back cover art by Dave Cockrum 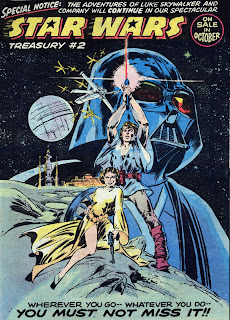 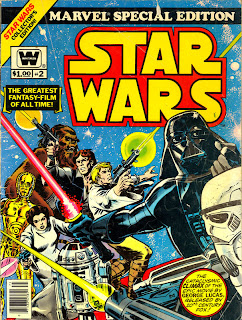 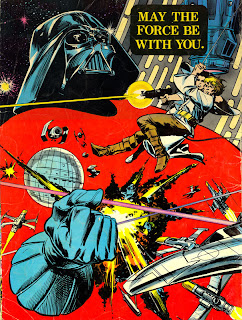 Back cover by Tony deZuniga (Why does Vader looks like a big tomato?) 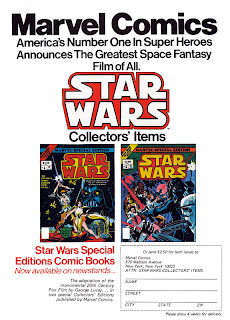 Posted by Mayor Todd Franklin at 9:10 AM

Oh Treasuries, how I love thee!! You gotta love the Whitman logo too. By the way, that Cockrum pin-up is beautiful. He would have been the perfect Star Wars artist although Carmine was pretty good too.

OMG Pizzazz magazine!! You always bring back a buried memory for me, Todd.

Lying on the floor reading Star Wars comics while listening to the soundtrack album and eating donuts sounds like the perfect way to spend an afternoon.

I think I'm going to give it a try.

Oh man! I totally had those.